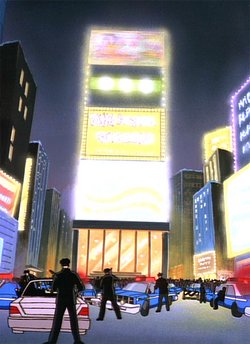 Times Square is the name given for the intersection between Broadway (the street, not the gargoyle), 42nd Street, and Seventh Avenue in New York City, and one of the city's best-known locations. This is the traditional site of New York's New Year's Eve celebrations, and is also famous for its neon advertising signs, theatres, and cinemas.

After Xanatos and Demona revived Coldstone, he came here, to angrily tear Times Square apart and battle Goliath briefly. (Goliath quickly relocated the battle to the George Washington Bridge, however, since Times Square was far too public for their encounter). ("Reawakening")

On December 31, 1996, Anton Sevarius and Fang planned to mutate the crowd that had gathered in Times Square for a New Year's Eve celebration, but were foiled by the Redemption Squad. ("Louse")

In 1997, after Jackal broke Hyena and Wolf out of prison, the three of them headed to Times Square to create havoc. As soon as Elisa alerted the Manhattan Clan, they set off to Times Square as well, to confront the Pack. ("Phoenix")