This article refers to the team of mercenaries. For their eponymous TV show, see The Pack.

Former and Current Members of The Pack. From left to right: Coyote 2.0, Fox, Wolf, Hyena, Jackal, and Dingo.

The Pack is a team of canine-themed mercenaries assembled by Xanatos.

In 1994, or perhaps earlier, Xanatos assembled the group to use for his own ends, though only Fox, their original leader, knew this (the two were already something of a couple at this point). [1] Meanwhile, Xanatos made them into the stars of their own television series, The Pack, where they were portrayed as continually doing battle with "Evil Ninjas". They quickly became heroes to the public, and also to the Trio when they awakened in New York City. Even Hudson enjoyed the program. 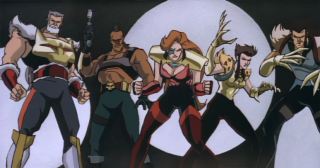 The original Pack. From left to right: Wolf, Dingo, Fox, Hyena, and Jackal.

The Pack members were bored with this life, however, feeling that they had plenty of fame and fortune, but were not seeing enough action. When they learned about the gargoyles (through Xanatos, who wanted to test the Pack's capabilities), they tricked Lexington into leading Goliath into a trap, so that they could hunt him for the sake of some excitement.

Goliath and Lexington managed to gain the upper hand over the Pack in the end, however, particularly when Fox made the mistake of taking a swimsuit model hostage in the middle of the culminating battle with the two gargoyles. She and Wolf were quickly arrested and sent to prison on Rikers Island. Jackal and Hyena soon followed them after their unsuccessful attempt on Xanatos's life. ("The Thrill of the Hunt", "Her Brother's Keeper")

Dingo left for Europe, but returned in 1995 to join Coyote 1.0 in breaking the Pack out of prison (except for Fox, who used the break-out to obtain an early parole, and in fact broke off her relations with the Pack thereafter). Under Coyote's leadership, the Pack made a fresh attack upon the gargoyles, culminating in a battle aboard the oil tanker Otoshiana Maru, but was again defeated. Having by now completely destroyed its original hero-image, the Pack turned to bank-robbing and other criminal activities, until Xanatos took charge of them again (through Coyote 2.0). This time, he upgraded the Pack; Wolf was mutated into a sort of werewolf, Jackal and Hyena were cybernetized, and Dingo given a high-tech suit of battle armor. The Pack battled the gargoyles a third time and once again was defeated. They were later arrested but escaped (Xanatos busted them out of prison again) and had to flee New York. ("Leader of the Pack", "Upgrade") [2] 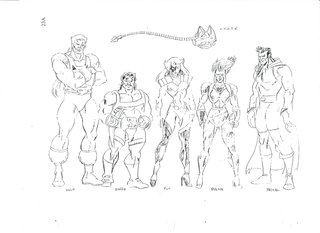 Unused designs for the Pack. Although, with the exception of Dingo and CY.O.T.I., these designs appeared in the Marvel comic.

Dingo broke off further relations with the Pack afterwards, disgusted by his former team-mates' increasing savagery, but Xanatos supplied Jackal, Hyena, and Wolf with a third Coyote robot and sent them to Egypt in 1996 to assist the Emir in summoning Anubis. After this incident (and the Pack's fifth clash with Goliath) ended, however, its members split up, going separate ways. ("Grief") Hyena and Wolf seperately found their way back into prison cells and Coyote continued to do work for Xanatos. ("The Green", "Vendettas", "Cloud Fathers", "The Rock", et al.)

In 1997, Jackal broke Wolf and Hyena out of prison, and all three proceeded to cause trouble in Times Square. They were in for a most unpleasant surprise, however, as the Manhattan Clan, now having more than doubled in size with the addition of Coldstone, Coldfire and Brooklyn's family, set out to confront them upon receiving the news from Elisa. ("Phoenix") Despite their upgrades, the Pack was quickly defeated by the Clan.

At some point in the future, perhaps because of this latest battle, an Ultra-Pack will be formed by Coyote 6.0, led by Coyote 7.0, and including Jackal, Hyena, Wolf, and a new member whose identity is as yet uncertain. More information about it, however, is unknown at present. [3][4]