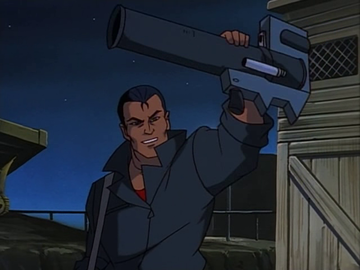 Tomas Brod was a prominent gangster in Prague. His first name is pronounced like Tomáš, a common Czech name.

His organization had become so formidable by 1996 that even the police were unable to hold him in check, allowing him to run riot throughout the city. Halcyon Renard entered into an alliance with him, giving him a Cyberbiotics hovercraft in exchange for Brod stealing the Golem for him. Armed with the hovercraft, he raided an armory at a Konrock construction site, but was defeated by Goliath and the Golem before he could successfully steal the weapons there. ("Golem")

After his defeat, Brod managed to escape to New York City, where he set up a new organized crime syndicate in rivalry to Tony Dracon's, even attracting Jack Dane into his following. A turf war between Brod and Dracon began, which Elisa, the Trio, and Angela finally managed to end by defeating Brod - who afterwards found himself sharing a cell with Dracon, to their mutual disgust. ("Turf")