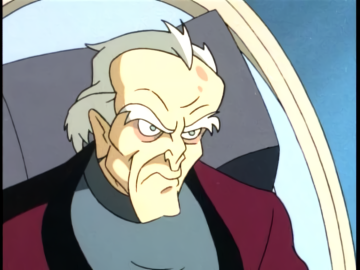 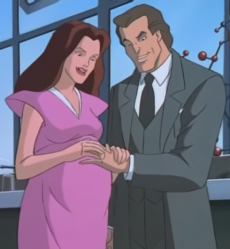 A younger Halcyon Renard with his pregnant wife, Anastasia.

Halcyon Renard is the CEO and founder of Cyberbiotics.

Halcyon Renard was born in 1928. [1] As a young man, Halcyon Renard worked as a scientist and thus met and fell in love with Anastasia Renard (maiden name unknown); they married and had one child, Janine Renard (now Fox). Renard was completely unaware that Anastasia was in fact the human alias of Titania. Later Renard would found the Cyberbiotics corporation.

Renard is a man with a strong belief in integrity and responsibility for one's actions, something that Anastasia/Titania increasingly found too rigid for her liking, resulting at last in their divorce. To Renard's grief, Janine also showed herself to have little fondness for his belief in honor and moral rectitude, and began a relationship with David Xanatos that saddened and angered him even more. ("The Gathering Part Two")

After the destruction of Fortress-1 by Demona during the Cyberbiotics raid, Renard personally financed the building of Fortress-2 to replace it, and went aboard with Preston Vogel for its maiden flight. On that occasion, he met Goliath for the first time, who had followed the airship to prevent Xanatos from sabotaging it, and took him prisoner. Renard learned Goliath's story from him, and made it clear to him that he needed to take responsibility for the harm that he did during the Cyberbiotics raid, rather than blaming it on Xanatos. Together the two of them saved Fortress-2 from Fox's attempt to sabotage it (with some help from Preston Vogel). Afterward, Renard decided that in helping save Fortress-2, Goliath had made proper amends for the damage of the earlier incident and he and Goliath became friends. ("Outfoxed")

By this time, however, Renard had contracted a debilitating illness that had already crippled him, and which was now slowly killing him. As it progressed, he for once forgot his belief in integrity, and made a desperate effort to avoid his doom by forming an alliance with Tomas Brod in Prague. Renard has found an ancient spell that would transfer his soul into the Golem. He hired Brod to steal the Golem for him in return for a Cyberbiotics hovercraft. Renard's soul was transferred into the clay body. Goliath and Max Loew persuaded him that such an action was wrong, however, and in the end, Renard understood them and had his soul returned to his own body, to patiently await his fate. ("Golem")

In gratitude, Renard offered to transport the World Tourists home, but Goliath declined, deciding to let Avalon decide when to return his company home. However, upon returning to Manhattan, Renard contacted Goliath's clan through Matt Bluestone[2]to tell them that the gargoyle and his companions are alive and well, but would be gone for an indefinite period of time. ("Pendragon")

Renard visited the Eyrie Building to attend the birth of his grandson Alex, and afterwards learned from Xanatos of how Oberon intended to kidnap the child. [3] He and Vogel entered the battle that followed to stop him, fighting against him in Fortress-2, but were finally defeated, along with all the other defenders. ("The Gathering Part One", "The Gathering Part Two")

After the events of "The Gathering" Renard has learned that Anastasia isn't human, but nevertheless he is still trying to get "his head around the entire Titania thing." [4][5]

Renard is currently dying of a crippling disease that he has had for some time now, which has already confined him to a high-tech wheelchair. It even renders him unable to participate much in the day-to-day affairs of Cyberbiotics. Renard was already divorced from Anastasia when he first became ill. [6]

Indeed, Renard will succumb to his illness at last, not long after the gargoyles' return to Castle Wyvern. In his final moments, he would likely have Titania (as Anastasia), Fox, Alex, Vogel, and Goliath at his side. [7][8]

In the early development of the series, there was talk of creating a rich, but benevolent, human as an ally for the gargoyles and to contrast with Xanatos, but according to Greg Weisman, the notion was dropped because they "didn't want to make life too easy for our heroes". Eventually the character of Renard would "sort of" embody that role. [10]

Frank Paur is credited for creating the character, with Cary Bates and Greg Weisman being credited with figuring out the character's name and his relationship to Fox. [11][12]