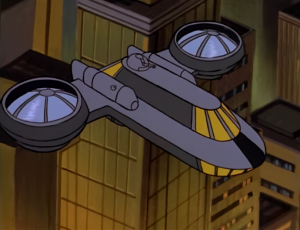 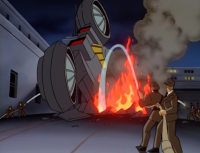 The hovercraft on fire.

The hovercraft was a flying vehicle designed and built by Cyberbiotics, similar to that company's flagships, Fortress-1 and Fortress-2, but on a much smaller scale. It flies by means of three large turbines that propel it off the ground.

When Halcyon Renard sought to capture the Golem of Prague, he hired Czech gangster Tomas Brod to steal it from its guardian Max Loew, allowing him to use the hovercraft for the theft. Brod was so impressed with the hovercraft that he asked to be given it in payment, instead of any money. ("Golem")

When Brod travelled to New York City to move in on Tony Dracon's turf, he brought the hovercraft with him and used it to attack Dracon's chopshop. By this time it had been fitted with a weapons turret, but it is not clear if that was part of the original design. Brod's men later used the hovercraft when they broke into Rikers Island prison to kill Dracon. Once Brod was inside, Angela and the Trio disabled the pilot and the hovercraft crashed into the roof of the building. Some prison guards were later seen putting out the fire that it had started, but the hovercraft itself was presumably damaged beyond repair. ("Turf")