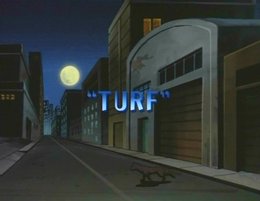 "Turf" is the sixtieth televised episode of the series Gargoyles, and the forty-seventh episode of Season 2. It originally aired on May 6, 1996.

Tomas Brod has moved his organized crime operation to New York and has gotten into a turf war with Anthony Dracon. Elisa has been working undercover as "Salli", and has infiltrated Brod's gang, planning to decimate both gangs before one wins the "turf war" and becomes too powerful. A sting operation at Dracon's chop-shop fails when Elisa is knocked unconscious, so she goes to the Trio and Angela for help. Things come to a head when Brod plans to raid the prison where Dracon is being held and kill him. Elisa stops him, revealing herself in the process, but the gargoyles come to the rescue at that moment, and both gangs are put behind bars.

The trio are at odds with each other, squabbling immaturely over Angela, and becoming careless in their duties. Angela grows increasingly agitated, and after some advice from Elisa, finally sets them straight. At the end of the night, The trio promises to leave Angela alone, but she tells them to just slow down and let things happen in their own time, before giving each suitor a quick kiss and informing them of her fifteen rookery sisters on Avalon.

"Let her sleep. The prince has a kingdom to conquer." - Jack Dane and Brod

"You're abusing your power!" - Brooklyn and Lexington

"Yeah, but first I-I kind of crashed it." - Angela and Lexington

Jack Dane from "Revelations" returns to become a member of Tomas Brod's gang (he should probably have stayed in the Witness Relocation Program), apparently out of hostility towards Tony Dracon and his family.

There are several allusions to past episodes here, including not only "Protection" (with Broadway proudly boasting about how he helped put Dracon behind bars) and "Golem" (with the return of Brod and his hovercraft - though how he recovered it is not explained), but also "Her Brother's Keeper" (Lexington recalls his flying the Pack's helicopter) and "The Price" (Broadway's turning to stone in mid-air during the battle with the Macbeth robot are also mentioned).

According to Greg Weisman, the events in "Vendettas" and "Turf" took place more or less simultaneously (see the Timeline for further details), indicating that Goliath and Hudson's absence was due to their fight with Wolf and Hakon's ghost. This doesn't explain Bronx's absence, however. Greg hints that the gargoyle beast was having an adventure of his own at the time. [1]

Elisa's alias of "Salli" is another in-joke; she was voiced by Salli Richardson.

Brooklyn's question to Goliath, "So when do we get our world tour?" was intended to foreshadow the TimeDancer spin-off. (Like Goliath in "Future Tense", Brooklyn really should learn to be careful about what he asks for.)

Though Lexington is as eager at pursuing Angela in this episode as Brooklyn and Broadway are, in fact (again according to Greg Weisman), he's actually gay - a revelation that would be handled very carefully in the series under Greg's direction. Presumably, Lex must not have realized this at the time of "Turf"; it does help to explain, though, why he wasn't as upset as Brooklyn was in "The Journey" when it became clear that Angela had chosen Broadway.

Brod and his gang shooting up Dracon's chopshop has been cut.