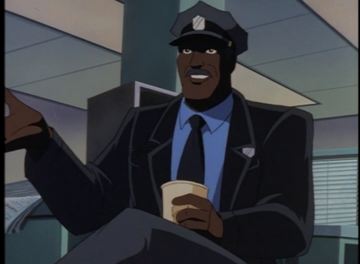 Morgan Morgan is a police officer in the NYPD, and a current member of the Gargoyle Taskforce. He is a close friend of Elisa Maza.

On the night that the gargoyles first awoke in New York City, Morgan was one of the police officers on the ground who witnessed the disturbance when the commandos invaded. He first met Elisa when she also arrived on the scene. ("Awakening Part One") Later in the same month, Morgan was transferred to the 23rd precinct, where Elisa was stationed. [2] Since then, he sighted the gargoyles on various occasions along with his partner, Phil Travanti.

In 1996, after the existence of the gargoyles was revealed to the public, Officers Morgan and Travanti joined Matt Bluestone's Gargoyle Taskforce. On Halloween, Morgan asked Elisa out on a date. She initially refused, but later changed her mind and Morgan accompanied her to David Xanatos' masque party at the Eyrie Building dressed as Sherlock Holmes. He realised that Elisa still wasn't ready for a relationship when she introduced him to "G" (Goliath), whom Morgan believed to be a human in a "beyond-amazing" gargoyle costume. He told Elisa that he was leaving the party, and although she tried to apologize to him he said no apology was necessary, since he already knew that he was her "rebound guy". ("Invitation Only", "Masque", "Bash")

Morgan was named after Morgan Lord Morgan III, one of Greg Weisman's classmates in high school. [3]

"Morgan" was also one of the names, considered during the series' early comedy development, for the character that eventually became Elisa Maza. The name was based on Julia Morgan, an architect. [4]