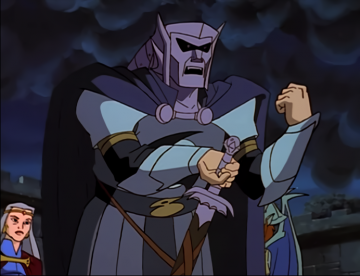 Guardian, real name Tom, was a young Scottish peasant boy who befriended the Wyvern Clan. He is now the Guardian of the Avalon Clan. 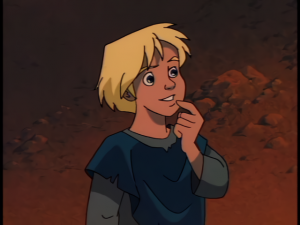 Tom was born in the year 986. [1] In 994, he and his mother Mary, along with a number of other Scottish peasants, were driven to Castle Wyvern to take shelter from Hakon and his Viking band. There he encountered gargoyles for the first time, and was delighted and fascinated by them. He befriended the Trio, but Mary disapproved of his reaching out to them and pulled him away from them, leading to the fight between the Trio and the human refugees that resulted in Goliath sending the Trio and their beast companion to the rookery. Tom was captured by the Vikings when Hakon took Castle Wyvern, alongside all the other humans. He felt confident that the Wyvern Clan would rescue them, but Mary told him that the gargoyles were all destroyed. Shortly thereafter, the few remaining living members of the Clan did indeed come to rescue the humans. This rescue led to the Magus putting all of the remaining gargoyles except Goliath to sleep. Tom, alarmed at the Magus' attack, ran to find Goliath. ("Awakening Part One", "Awakening Part Two")

Later, after the Magus turned Goliath to stone at his own request, Tom left Castle Wyvern with Princess Katharine, the Magus, and Mary to go to Kenneth II's court. With them they took the thirty-six gargoyle eggs from the rookery. Because of Tom's bold willingness to keep the eggs safe, Katharine appointed him Guardian of the Eggs. After a long journey, the travelers arrived at Edinburgh Castle. Here Tom witnessed the murder of King Kenneth by Constantine (afterwards Constantine III), and because of this, had to flee Scotland alongside Katharine, the Magus, and the eggs, to be kept safe from the usurper.

They made their way to Avalon, where they hoped Constantine could never find them and they could live in peace. At the watery gates of Avalon, Tom said his goodbyes to his mother, who was returning to the mortal world with Finella to keep the Grimorum Arcanorum away from Constantine and his sorcerors. Obviously, this was very hard for Tom, but he could not go back and he had sworn to protect the eggs and the beings inside them. Constantine and his allies continued their search for the boy, who they called "the witness", but Brother Valmont determined that Tom had left the mortal world or perhaps was dead and therefore no threat to Constantine's claim to power. (Avalon Part One", "Tyrants") 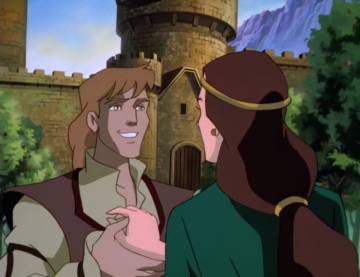 An older Tom (with Katharine).

Meanwhile, on Avalon, Tom grew up, and in time, fell in love with Katharine and she with him; they lived together as husband and wife, and together (with the Magus) raised the young gargoyles of the Avalon Clan, which Tom continued to call the "Eggs", as foster-parents. Their lives were idyllic and peaceful. ("Avalon Part Three")

Raising thirty-six gargoyles was not the reason behind not having any biological children with Katharine. Most likely, either he or Katharine (or both) had a medical issue that prevented them from having any kids. [2][3]

Once every century, Tom would venture into the outside world to see if Goliath and his clan had awoken and to see if the the world was safe enough for the Avalon Clan to emerge from the island. [4] Avalon would send Tom on various adventures during these excursions from the island and it was probably on one of these outings that he acquired his sword and armor. He also aged faster than his companions on Avalon due to this time spent in the real world. [5] On his tenth journey to the outside world, in 1995, Avalon sent him back to Wyvern Hill. There he found that Castle Wyvern was gone. [6] He hiked to a nearby village and learned from the locals that the Castle had been transported to Manhattan where it was reconstructed atop a "skyscraper." [7] He spent another day in the area, contemplating whether Goliath and the other gargoyles could have awakened and reminiscing on his life in the area. He even searched through the Archmage's Caverns and in the process alerted the ghosts of Hakon and the Captain of the Guard that Goliath may be alive. He returned to Avalon and informed Katharine and the Magus on what he had discovered. [8][9] 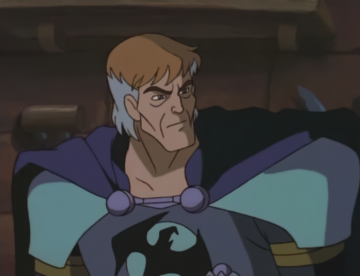 Not long after, the Archmage himself attacked the Avalon Clan. Tom, the Guardian, did his best to defend his family, but could do little against the Archmage and his allies (the Weird Sisters, Macbeth and Demona). He quickly left the island to get help and Avalon took him to New York where he was involved in a fight with some street thugs and taken into custody by Officer Morgan, who Tom voluntarily surrendered to, seeing an officer of the law as a kindred spirit. He told Morgan he was looking for gargoyles, and Goliath in particular, and this brought him to Elisa Maza's attention. She arranged to have him meet with Goliath at Belvedere Castle where he was at last reunited with the gargoyle. Tom took Elisa, Goliath and Bronx to Avalon where they assisted the Clan in defeating the Archmage and his allies. ("Avalon Parts One", "Avalon Part Two", and "Avalon Part Three")

Later, when Oberon returned to Avalon to reclaim the island, Tom helped Elisa, Katharine, and Ophelia construct the Iron Bell that would defeat him, and then rang it again and again to weaken him. Tom nearly killed Oberon, but was stopped by his own good nature and honor. Afterward, Oberon rewarded this act of kindness by allowing the Avalon Clan to remain on the island, and moreover, named them the Honor Guard of Avalon. ("Ill Met By Moonlight")

Tom continues to live on the island. It seems highly likely that he will play a part in the formation of the Order of the Guardian sometime in the future. [10][11]

In his role as Guardian, Tom wears a suit of armor and a cape and carries a sword. The face shield of the helmet looks somewhat like Goliath's face and the cape has the appearance of folded gargoyle wings. There is also a gargoyle motif on the chest of the armor, and a heel-claw molded in the armor on each leg. Originally he was ten years younger than Katharine, but his time spent in the real world every century has shortened or may have closed this age gap. [12]

In early drafts of the script for "Awakening" (before Michael Reaves was attached as a writer), Tom was known as "Robby". This name was later used for the Captain of the Guard. [13][14][15]