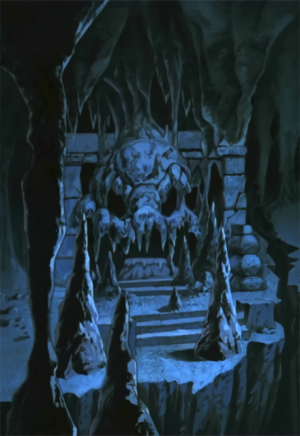 The Archmage's Cave is a cave near Wyvern Hill, and a place of ancient magics, quite likely pre-dating even the Archmage.

In its depths stood the Megalith Dance, a great monolith with strange magical properties, its origins as yet unknown. Strange carvings have been made on the walls, including one of the Archmage felling gargoyles. While the history of this cave is unknown prior to 971, the Archmage knew of these ruins before he entered into Prince Malcolm's service. [1]

By 984, the Archmage made it his headquarters after his banishment from Castle Wyvern, and fought here against Goliath, Hudson, and Demona, before he fell into a chasm, seemingly to his doom. ("Long Way To Morning") Ten years later, the Vikings camped there after the sack of Castle Wyvern, unaware of the cave's true nature. When the Captain of the Guard and Hakon fell off the clifftop to their deaths, however, the magics of the cave preserved their ghosts, trapping them there. For the next thousand years, the two ghosts haunted the cave, unable to leave. ("Awakening Part Two", "Shadows of the Past")

In late 1995, Tom arrived at Wyvern and visited the cave. Hakon and the Captain learned from Tom's musings that Goliath may be alive. [2] In very early 1996, Goliath, Elisa, Angela, and Bronx came to the cave on their first stop on the Avalon World Tour. When they arrived, the ghosts of the Captain and Hakon attacked Goliath, driving him to near madness by their illusions and finally drawing him to the lower chambers where the Megalith Dance stood. They attempted to use its powers to drain Goliath's life-force and transfer it to themselves, but the Captain then repented and foiled Hakon's effort. The result was the destruction of the Megalith Dance, the Captain's release from the cave, and Hakon being trapped there once again, until Wolf later on came to the cave and helped him escape. ("Shadows of the Past", "Vendettas")