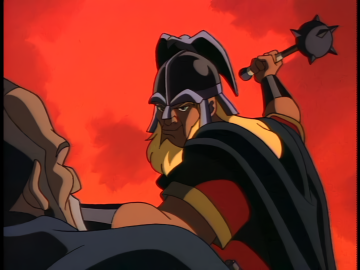 Hakon was the leader of the Vikings who attacked Castle Wyvern in 994, and also an ancestor of Wolf. To Hudson, he is Hakon Clan-Slaughterer.

When Hakon and his followers attacked Castle Wyvern in 994 (presumably following refugees that had taken shelter there, including Mary and Tom), their first assault was repulsed by the gargoyles. Hakon initially retreated, but vowed revenge. When the Captain of the Guard offered to betray the castle to him, Hakon eagerly accepted his offer, but after sacking the castle and taking Princess Katharine and her court prisoner, proceeded to smash almost the entire Wyvern Clan in its stone sleep. While holding the Princess and the Magus prisoner, Hakon gleefully burned a few pages from the Grimorum Arcanorum (including the counterspell to the Sleep Spell), taking pride in his own illiteracy as he did it. When Goliath attacked the Vikings' camp to rescue the human prisoners and avenge his clan, Hakon and the Captain of the Guard fell off a cliff to their deaths. ("Awakening Part One", "Awakening Part Two")

Or so it appeared. But the ancient magics of the Archmage's cave nearby, alongside the sheer force of Hakon and the Captain's hatred of each other (alongside Hakon's hatred of Goliath and the Captain's self-hatred for having failed to save the clan), caused the ghosts of the two men to remain there, bound to the cave. They haunted the area for a thousand years, when a very much older Tom (now Guardian) arrived from Avalon and explored the modern day Wyvern Hill, as well as the caverns.

It is due to his visit that Hakon and the Captain figure their target is still possibly alive.[2]

Sometime Goliath and his companions came to Wyvern on their first stop on the Avalon World Tour. There, Hakon, seeing his opportunity for both revenge and freedom, joined with the Captain in an attack upon Goliath, first breaking him down with a series of illusions designed to destroy his sanity and fill him with guilt over the Wyvern Massacre, and then manipulating the magics of the cave (and particularly those contained in the Megalith Dance) to transfer Goliath's life-force from himself to Hakon and the Captain, making Goliath a ghost and Hakon and the Captain fully alive once more.

However, the Captain, in the end, proved unwilling to betray Goliath again, and foiled Hakon's scheme, saving Goliath's life and winning freedom for the Captain's ghost. Hakon was trapped in the cave once again, this time on his own, screaming in fury, "Don't leave me here! Not without anyone to hate!" ("Shadows of the Past")

But he was not imprisoned in the cave for all time, after all. Reaching out to Wolf as his descendant, he drew the mutated former-Pack-member to Wyvern, and there arranged for himself to become linked to a Viking battle-axe in the cave, which Wolf then took to New York City. The two of them attacked Goliath and Hudson there, hoping to destroy them at last in conjunction, but the two gargoyles won in the end, and destroyed Hakon's axe, banishing him from this world forever. ("Vendettas")

In early drafts of the script for "Awakening" (before Michael Reaves was attached as a writer), the Vikings were generic Marauders. Hakon's name was originally "Lochter" and then "Cole". [3][4][5]