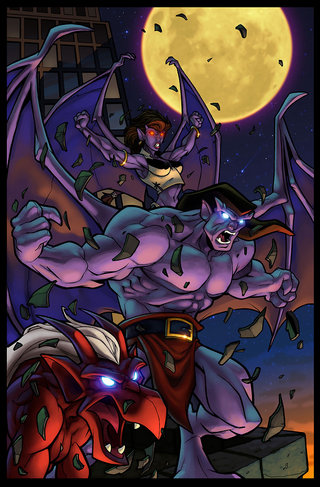 Released from a medieval Scottish curse, the Gargoyles now live in the rooftops of Manhattan. But all is not safe for them — a mysterious organization called the Quarrymen are determined to see them all obliterated. The gargoyles must rely on each other and their human friends to turn the tide of public sentiment and show that they can live peacefully with humanity. Gargoyles is a FULL COLOR comic book series based on the Disney Afternoon animated television series. Written by series creator Greg Weisman.

Manhattan is unsure of what to make of the gargoyles since they've been exposed. John Castaway starts the Quarrymen organization, further fueling hatred and fear of the gargoyles throughout the populace. Goliath is upset and frustrated, and goes to receive comfort from Elisa. His stone form is spotted on her balcony by the Quarrymen Banquo and Fleance, who attempt to smash him, but Elisa is able to stall them until he wakes up. Goliath and Elisa flee with the Quarrymen helicopter right behind them, and Goliath's wing is hit mid-flight by a direct hit from the helicopter.

Matt Bluestone covers for the gargoyles with the media and Captain Chavez.

The gargoyles express their unease with living at the castle with Xanatos.

Goliath is shot at by Art en route to Elisa's apartment.

Vinnie Grigori joins the Quarrymen, but is somewhat wary of Castaway's tactics.

Vinnie has been offered a job in Japan.

The first new Gargoyles story from Greg Weisman in almost ten years, "Nightwatch" relaunches the series in its new comic book form. While the story is familiar to those who saw "The Journey" (the only episode that Greg wrote for The Goliath Chronicles), there are still enough twists in it to make it an enjoyable experience.

"Nightwatch" is set in the immediate aftermath of the events in "Hunter's Moon" Part Three, as New York City reels under the revelation that gargoyles actually exist. While Travis Marshall talks about the impact of this discovery on the air and even interviews Matt Bluestone about it, an apparent newcomer named John Castaway manipulates the frightened citizenry into joining his organization, the Quarrymen, and Goliath, troubled over this turn of events, goes to visit Elisa, seeking solace from her. These last two threads soon join when the Quarrymen discover Goliath roosting outside Elisa's apartment...

Tension is in the air throughout this issue. We see just how on edge the people of Manhattan are when Art (the restaurant-owner from "Protection") opens fire on Goliath when the latter glides past his apartment window (leading to one of Goliath's rare jokes, when he tells Art that he can keep his gun - after twisting it into a spiral shape), and then when the audience at Castaway's meeting eagerly snatch up hoods and hammers at the end of his speech. But there is more than even that. After the destruction of the Clock Tower, the gargoyles are living with Xanatos again - and wonder how much they can trust him (with good cause). At least they're in no danger of Xanatos killing them in their stone sleep, as Goliath and Hudson agree - but who knows what the Machiavellian businessman may be planning? We can expect the interactions between the clan and Xanatos to be much more complex than they were in The Goliath Chronicles.

One of the highlights of the issue is Castaway's recruitment speech, which is filled with delicious irony. He begins by talking to his audience about the troubles weighing upon them - "violence, racism, injustice" - all while urging them to join an organization that typifies all three of these. He asks them if they fear the gargoyles attacking them in their sleep or kidnapping their children; in the original sixty-five episodes of Gargoyles (and in this issue, for that matter), it's clear that gargoyles similarly fear (with good reason) humans attacking them in their stone sleep, and in "The Reckoning", Demona interpreted Princess Katharine and the Magus's rescue of the eggs as kidnapping. Finally, Castaway uses the word "alone" repeatedly throughout his speech; this gains all the darker a significance when we remember where we heard that word before in the television series - and which character it was linked to.

The Quarrymen are an element in Gargoyles that have suffered under a bad reputation up until now, largely through the clumsy use that The Goliath Chronicles made of them. One of its biggest blunders, in particular, was its choosing to make Castaway's followers almost entirely criminals, thugs, and mercenaries; this was a mistake in that it blurred the "racism and fear of the unknown" issue that was so critical to the Quarrymen's original conception. Since Goliath and his clan (the most prominent gargoyles in New York, and therefore the ones most likely to be targeted by the Quarrymen) are crime-fighters, the criminal element in New York would be after them anyway; their pursuit of the gargoyles would be no more a case of bigotry than the criminals in Gotham City trying to get rid of Batman or the criminals in Metropolis trying to get rid of Superman. The comic, on the other hand (like "The Journey"), clearly shows that Castaway's audience is made up of ordinary, well-intentioned, law-abiding citizens (even though he does have mercenaries like Banquo and Fleance working for him as well); I hope that this element will remain in the Quarrymen in the comics, and allow that organization more depth.

Vinnie, previously used for comic relief purposes in "Vendettas", is back, and still portrayed in the same humorous light as before (he has trouble reading his own handwriting, and his responses to Castaway's questions are out of sync with those of the rest of the crowd). But mingled in with this, we can see something more serious. Vinnie is already entertaining doubts about whether the Quarrymen really need to go to the lengths that they are going - something which, as any viewer of "The Journey" knows, will prove to be significant soon.

Elisa is there to help Goliath as usual, valiantly defending him against Banquo and Fleance when they show up to smash him in his stone sleep. (In a sign that the comic's S&P may be more liberal than those of the animated series, Banquo actually delivers a very crude insult at Elisa - which is cut off mid-word when she punches him a good one.) The comic ends on a cliff-hanger as Goliath and Elisa flee the Quarrymen in their helicopter, only for Goliath to be shot in the wing...

"You're tired. We both are. Things'll look better after a good day's sleep. And if not...well, tomorrow's my night off...We'll use the time to make things better." - Goliath and Elisa

While the comic follows the first half of "The Journey" closely, there are a few differences with the television episode, some due to re-incorporating rejected elements of Greg Weisman's original script, others due to new material specifically written for the comic. Among these are:

Many familiar "bit characters" appear in this issue. The New York citizenry being interviewed on the first page include the Jogger, Billy and Susan's mother, and Vinnie (who recalls his pieing of Goliath in "Vendettas"). Vinnie and Billy and Susan's mother are both at Castaway's meeting. Art encounters Goliath when the latter is on his way to Elisa's apartment (with Lois having an off-stage role in this scene). Banquo and Fleance, formerly Macbeth's henchmen, are now working for Castaway (maybe in part to get revenge for their past encounters with the gargoyles in "A Lighthouse in the Sea of Time" and "Pendragon"), another irony in light of his true identity and descent. And Travis Marshall discusses the gargoyle issue on the news.

According to Greg Weisman, the man in Japan who offered Vinnie a security job is Taro.

Greg first mentioned that Castaway and Jon Canmore from the "Hunter's Moon" three-parter were the same man as early as 1997, a detail that would not be canonically confirmed until the SLG issue "Estranged" eleven years later. [1] There are, however, two hints of this in "Nightwatch": the first is his name, which fits the Canmores' pattern of aliases beginning with a hard C (Conover, Correy, Carter); the second is his Hunter's symbol (three red slashes), protruding beneath his Quarryman badge.

In Goliath's reminiscences, we see Hakon about to smash a stone gargoyle, and in the panel representing the gargoyles' various adversaries, Xanatos, Owen, Demona, Fox, and Macbeth.

Goliath's line during those same reminiscences, "Now, here in Manhattan, the spell has been broken, and we live again!" is a quote from the narration during the opening sequence in Season Two.