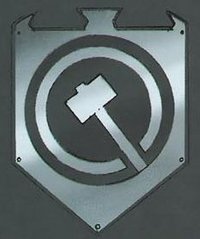 The Quarrymen are a band of gargoyle-hunters set up by John Castaway in 1996, with assistance from the Illuminati (which already had the group under the works), for as yet unknown reasons. [1]

Preying upon the fear and vulnerability of a public still reeling from the revelation that gargoyles existed in Manhattan, Castaway lured a number of New York citizens, including Sarah Browne, Vinnie Grigori (for a short time), Lou, and Chaz into his organization, and employed Banquo and Fleance as officers to train these recruits for battle. Under his leadership, the Quarrymen now search New York City for gargoyles, hoping to destroy or at least contain them. ("Nightwatch", "The Journey") 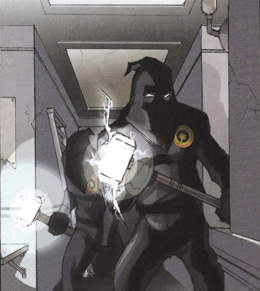 The Quarrymen wear black uniforms. Each also wears a hood (vaguely evocative of both the Ku Klux Klan and an executioner's hood) and carries electrically-charged hammers capable of shattering a gargoyle in his or her stone sleep, or doing damage to him or her while awake. They also carry firearms. The organization also possesses at least one helicopter for hunting airborne gargoyles as well as vans and other vehicles. Their main offices are located at the Quarryman Brownstone.

Each Quarryman also wears a distinctive badge bearing the symbol of the organisation: a stylised letter 'Q' formed from a Quarryman hammer and the greater arc of a circle around the hammer's head.

The name 'Quarryman' is particularly apt as it has something of a double meaning. Quarry could refer to their intentions to break up stone, or in this case destroy stone-like gargoyles, but quarry, meaning prey, also points to their descent from the Hunter legacy via John Castaway. 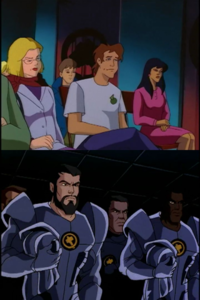 In Weisman's universe, there are concerned citizens. In TGC, there are thugs who just want to SMASH SOME STONE!

The Quarrymen, with or without Castaway would continue pursuit against the gargoyles. They would employ Jackal and Hyena to attach some weapons to Broadway which would automatically fire and discredit him in the public. ("Broadway Goes to Hollywood")

The Quarrymen would later pursue Hudson shortly after receiving treatment for the loss of his sight, only to be defeated by him, along with Jeffrey Robbins. ("The Dying of the Light")

The Quarrymen along with Castaway were dealt with for good early in 1997 after attacking a train which was transporting Angela and Bronx. Their efforts resulted in an arrest. ("Angels in the Night")

Early on, the group seems to genuinely fear the gargoyles, but later encounters show otherwise as they set up a mugging with the intent of forcing them out, as well as the aforementioned attempt to discredit Broadway. ("Generations") In "Angels in the Night", Castaway set up a fake child in distress to lure the clan into a trap and deliberately endangered the passenger train so that the gargoyles would come to the aid of the people on board.

After "The Journey", the Quarrymen of The Goliath Chronicles appeared to be composed almost exclusively of hired thugs, rather than the ordinary citizens who attended Castaway's meeting in "The Journey" (and without even any explanation for the shift).

There was an award for Quarrymen who were successful called a Silver Hammer. A member by the name of Maxwell was set to receive one, but likely didn't after the organization's downfall.

They also had both an Alpha and Beta Squad, but neither are likely active after the groups' defeat.