For the character known as Hunter in Gargoyles: Bad Guys, see Robyn Canmore 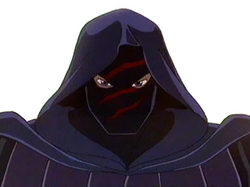 The Hunters are fanatical gargoyle-hunters who wear a distinctive mask with three red slashes across the face. The Hunters are particularly known as an enemy of Demona. Many humans have adopted the name and mask of the Hunter throughout history, beginning with Gillecomgain in 994 and culminating in Jason, Robyn, and Jon Canmore in 1996. Despite having hunted Demona for a thousand years, they are apparently unaware of the fact that only Macbeth can kill her.

As a boy, Gillecomgain was attacked by Demona and her claws left three scars across his face. ("City of Stone Part One", "Hunter's Moon Part One") In 997, he was taken under the wing of Constantine, who admired him for his vendetta against gargoyles. Before the Battle of Rathveramoen, Constantine painted his entire head in black war paint, with three red slash-marks across his face, using Gillecomgain's own facial scars as inspiration. This look was later adopted into the mask worn by all Hunters from that point on. ("The Gate", "Tyrants", "Phoenix") Gillecomgain hunted Demona ruthlessly as the Hunter throughout all Scotland, and also presumably destroyed any other gargoyle that he came across.

After some unspecified event, Canmore resumed the role of the Hunter or passed it on to the Canmores who succeeded him to the post, descended from his son, Donald. [1][2] These Canmores may also be descendants of an illegitimate heir. [3] The Canmore Hunters pursued Demona throughout first Europe and then the world over the centuries, ruthlessly hunting her and seeking her death, as well as any gargoyle they discovered. The details about them between 1057 and 1980 are as yet unknown, except for Stuart Canmore who attacked her in Renaissance Florence in 1495, when she stole the Medici Tablet, and Fiona Canmore who hunted her in Paris in 1920. However, they seem to have been a nearly constant menace to her. Over the centuries, it is also likely the Hunters crossed paths with Macbeth, though it is uncertain if they were fully aware who he was. ("Hunter's Moon Part Two", "The Last") [4][5]

By 1980, the Canmores had long since forgotten how the Hunters had begun, but continued to play the role out of force of habit and the weight of family tradition, not to mention the fact that it is much easier to keep a feud going than it is to end one. In that year, the current Hunter, Charles Canmore, attacked Demona at Notre Dame Cathedral in Paris and was slain by her, on the night of September 28th. His three children, Jason, Robyn, and Jon, took up the mission, culminating in their climactic encounter with both Demona and the Manhattan Clan in New York in 1996. The battles that they fought there caused the destruction of the clock tower, the revelation to the world that gargoyles exist, the near-death of several gargoyles and humans, the massive injuries to Jason Canmore, and finally brought the line of Hunters to an end. ("Hunter's Moon Part Three")

However, the Hunter legacy did continue in a new direction. Jon Canmore, the only one of the three siblings still desiring to continue the feud, changed his name to John Castaway and set up the Quarrymen. ("Nightwatch", "Estranged") Robyn Canmore also continued to use the codename Hunter as the leader of the Redemption Squad, although she began hunting different prey than gargoyles. ("Strangers", et al.)

Macbeth also temporarily assumed the Hunter's mask and identity in 1995 when he fought Demona during the time that she had placed her "stone by night" curse upon the human inhabitants of New York City, telling her, "I wear this as a reminder of your treachery." ("City of Stone Part Four)

The Hunters always wore a hooded mask with three red slashes upon it as a badge, to conceal their true identity. They carefully upgraded their equipment over the centuries; some Hunters used falcons to aid in the hunt while the Renaissance Hunter pursued Demona mounted in a flying machine that looked like something out of one of Leonardo da Vinci's notebooks. By 1996, Jason, Robyn, and Jon armed themselves in New York with an enormous airship, insulated suits, and even a robotic falcon. [6]