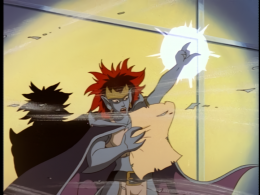 Demona casting her spell on a page torn from the Grimorum Arcanorum. 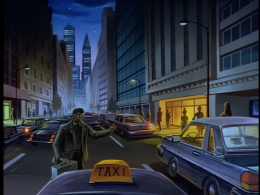 The stone by night spell was a curse Demona cast on television in Manhattan to turn its residents to stone at night to commit her version of the Wyvern Massacre.

Deceiving Xanatos about the spell's true nature, Demona was able to use PackMedia Studios to broadcast her spell. Almost everyone in Manhattan saw it. The spell was cast on November 9th and it ended November 12th, 1995. The only way the spell would end is if the sky burned. Using his Steel Clan robots and with help from the Manhattan Clan, Xanatos devised and executed a solution to break the spell by using jet packs to disperse gas, that when ignited made the sky appear to be on fire.

Those who were known not to be affected by the curse were:

Unlike the spell's conditions that effected only those who could both see and hear it, the terms to break the spell required no visual trigger, considering anyone that was solid stone had no way to see the sky burn. This also meant that anyone who watched a New York-based station from outside the city wouldn't need to be physically in the city when the skies burned for the spell was broken. [2] The terms of the spell were also flexible enough that watching a VCR recording would have had just as much of an impact as watching the initial broadcast so long as it was seen before Xanatos set the sky ablaze. [3]

According to Owen, the spell is translated thus:

All who see this, all who hear this,
turn to stone throughout the night
until the skies burn

However, a more literal translation would be "All who have been seen, all who have been heard, throughout the night change to stone until the sky burns." Since Owen's translation more accurately describes the effects of the spell, the Latin is probably incorrect.

Much like the Sleep Spell establishing that mortal magic on Gargoyles requires a time-limit, the Stone By Night Spell was the first to demonstrate that mortal magic also requires that a person must see and hear the spellcaster in order for the spell to have any power. In his ramble for "City of Stone Part One", Greg Weisman wrote that he "always felt that the magic our various sorcerers did couldn't be as simple as it seemed", and that these requirements were "an attempt on my part to demonstrate that it was about more than just being in range with someone who has a copy of a Grimorum page." [4]