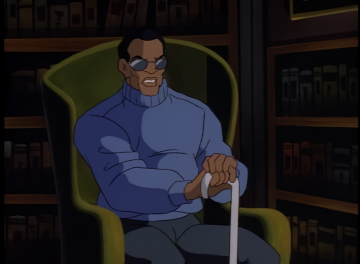 Jeffrey MacClain Robbins is a writer, and close friend to Hudson. [1][2]

Robbins was blinded while serving in Vietnam, and after leaving the Army took up writing novels, such as Gilgamesh the King. He's also written about Beowulf. [4] After a while, however, he found himself temporarily out of inspiration.

He met and befriended Hudson when the old gargoyle washed up just northwest of Harlem right outside Robbins' house during the Scrolls of Merlin adventure, but Robbins was unaware of Hudson's true nature thanks to his blindness. [5] Robbins helped Hudson locate Macbeth, and also encouraged him to learn how to read upon discovering Hudson's illiteracy, explaining to him that it is no shame to be illiterate, but only to remain so. After the Scrolls of Merlin were recovered, Jeffrey became inspired enough by the event to compose a new novel, The Sword and the Staff, about Merlin. ("A Lighthouse in the Sea of Time")

Jeffrey Robbins later on met Hudson and the other gargoyles again, during Demona's "stone by night" curse upon New York, and helped them discover that she was behind it. (He himself escaped her spell because of his blindness). ("City of Stone Part Two")

When the media reported that gargoyles existed in the fall of 1996, Robbins began to suspect that Hudson might be a gargoyle for a variety of reasons (Hudson's smell, the fact that he has never shook Robbins' hand, late night visits with departures before sunrise, etc.). It was not until Halloween when Bronx and Hudson joined Robbins and Gilly, Robbins' guide dog, to hand out candy to children that Robbins finally got the truth out of Hudson. The revelation was uneventful and it is clear that Robbins will continue to be a close friend to Hudson. ("Masque", "Bash")

Jeffrey appeared in "The Dying of the Light", an episode of the The Goliath Chronicles. His role in there provided one of the better moments of that series as he assists Hudson against the Quarrymen and even reveals how he'd figured out that his friend was a gargoyle (this last scene was adapted by Greg Weisman into the SLG comic issue "Bash", as a "tribute to all the hard work the TGC crew put in, with little thanks or reward"). [6]