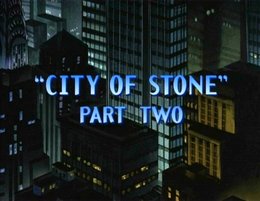 "City of Stone" Part Two is the twenty-third televised episode of the series Gargoyles, and the tenth episode of Season 2. It originally aired on September 19, 1995.

Demona's spell has struck Manhattan, turning it silent as most of its citizens have become stone. After the Manhattan Clan realizes what's happened, Goliath locates Xanatos at PackMedia Studios, and grudgingly agrees to work with him to break the spell. Meanwhile, Demona gleefully smashes humans at her leisure, while Macbeth, wearing the mask of the Hunter, pursues her with deadly intent. In 1032 Scotland, circumstances are quite different between the two characters. They once again come into contact at Castle Moray, where Macbeth is stalking Gillecomgain after he learns from Duncan that Gillecomgain killed his father, and Demona has been clued in to the Hunter's whereabouts by the Weird Sisters. A battle ensues and Macbeth saves Demona when she is nearly pulled down by Gillecomgain while hanging from the castle ramparts. Gillecomgain falls to his death, but the "Hunt" does not die with him, as Duncan takes up the Hunter's mask for himself.

The episode opens with Xanatos plummeting towards Earth in his helicopter with a stone Fox in the cockpit. Xanatos is able to land, and makes his way to PackMedia Studios where he ends the broadcast, but learns he can't as easily end the spell.

Not yet clued in to the spell, the gargoyles are confused to wake up to a stone statue of Elisa. They go off to patrol and end up at Jeffrey Robbins' house. The author was unaffected by the spell due to his blindness, and he shows the gargoyles the television broadcast. Now knowing that Demona is behind the spell, the gargoyles split up into pairs to search for her. Goliath is prepared to kill Demona, but the Weird sisters, in the guises of stone children, warn him that he should not let vengeance overtake him.

In the eleventh century flashback, Bodhe tells Macbeth that he will marry Gruoch off to Gillecomgain, admitting the marriage was ordered by Duncan. Macbeth wants to run away with Gruoch, but is convinced by Bodhe to break it off with her, fearing what the consequences would be if they were caught. Gruoch is forced to marry Gillecomgain, but afterwards Duncan switches sides after Gillecomgain refuses to kill Macbeth. Duncan reveals to Macbeth that Gillecomgain killed Findlaech, while acting shocked by the revelation himself. After Gillecomgain is killed, Macbeth becomes the Steward of Moray, and is happily married to Gruoch.

During the wedding of Gruoch and Gillecomgain, Duncan introduces his infant son Canmore to his court.

The Hunter breaks into PackMedia Studios while Demona is there fighting Xanatos. Demona attacks him, but retreats after she realizes the man behind the mask is Macbeth due to their shared pain link.

"It's a pretty good likeness."
"I don't think so, the nose is all wrong!" - Hudson, Lexington, and Brooklyn

"I fear that finding her will be all too easy." - Brooklyn and Goliath

"Not all would agree."
"Certainly not our hero." - Phoebe, Selene, and Luna

"Think well before you risk my defiance, Prince Duncan." - Duncan and Gillecomgain

"Never! We will put an end to Demona's evil, once and for all." - Brooklyn and Goliath

"Do you want vengeance, or a solution? This is bigger than anything either of us has ever faced. We'll have to work together to stop her. Truce?"
"Hrrmm, Agreed." - Goliath and Xanatos

Jeffrey Robbins reappears (as someone whom the gargoyles can get information from, thanks to his blindness), as does his dog Gilly. He next appears in "Masque".

Brooklyn still displays some of his vengeful attitude towards Demona from "Temptation".

In the flashback scenes, Duncan is shown taking the mask of the Hunter after Gillecomgain's death. Duncan would also become the ancestor of all subsequent Hunters.

This episode marks the end of Demona's alliance with David Xanatos, which had been formed even before Xanatos' first appearance in "Awakening: Part Two". Xanatos and Goliath then form their own alliance in order to foil Demona (they had previously worked together in "Eye of the Beholder", just as briefly).

In one of the most notorious errors of the series, Demona includes among her victims during her "smashing spree" two stone humans who bear an uncanny resemblance to Brendan and Margot - even though the yuppie couple will appear in many more episodes after "City of Stone". This might count as the one occasion where the reuse of familiar characters for incidental scenes turned out to be a bad idea; Greg Weisman has been grilled over this incident several times by fans since then. (His "defense" is that Demona had most likely shattered two humans who looked similar to Brendan and Margot.)

Gruoch is briefly referred to by Bodhe during her wedding to Macbeth as "Lady Macbeth", the only time that she bears that name during Gargoyles. Certainly she is a far cry from the Lady Macbeth of William Shakespeare (a role which Demona would be better-suited for - and does indeed fill, in a sense, in "Sanctuary").

Canmore, Duncan's son (introduced here as a baby), was named Malcolm in actual history (and in Shakespeare's play); "Canmore" was only a nickname, being Gaelic for "big-head". The script deliberately called him Canmore throughout in order to distinguish him from Prince Malcolm.

In actual history, Bodhe and Gruoch were descended from Kenneth III (997-1005), whom Duncan's grandfather, Malcolm II (1005-1034), the "Maol Chalvim" of "Avalon" Part One betrayed and overthrew. (This is confirmed in the Gargoyles Universe in "The Gate".) Since they would thereby have had a better technical claim to the Scottish throne than Duncan (or Macbeth) did, this offers a possible reason as to why Duncan opposed Macbeth and Gruoch's marriage - and an additional reason for his eagerness to get rid of Gillecomgain after his marriage to Gruoch, once Gillecomgain developed too defiant an attitude towards Duncan.

Hudson reveals that in order for you to be affected by magic, you must both see and hear the spellcaster - which is why Jeffrey Robbins was not impacted by Demona's spell. (Presumably, any deaf people in Manhattan as well as blind people were thereby spared, although no examples of the former were shown in the episode.) Since both Puck and Oberon were able to enchant the entire population of Manhattan without being seen and heard by them (in "The Mirror" and "The Gathering" Part One respectively), evidently this rule only applies to mortal magic.

In 1997, Greg Weisman wrote a short story on Ask Greg taking place during the events of this episode, on the night Demona broadcast the Stone By Night Spell.

A one second scene in the Gillecomgain/Demona battle where Gillecomgain manages to land a punch on Demona is cut out.