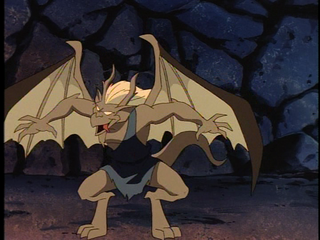 "Brooksbro" was an unnamed male gargoyle in ancient Scotland. He is Brooklyn's biological older brother. [1]

Brooksbro hatched in 938 in the rookery of the Wyvern Clan. Sometime between 988 and 994, Brooksbro left Wyvern with many other gargoyles to help found a new clan. The new clan was destroyed sometime after, but Brooksbro and a few other members of the clan managed to survive. [2] They later became the Lunfanan Cell of Demona's Clan.

In 997, Brooksbro fought in the Battle of Rathveramoen where he encountered Brooklyn, his biological brother. Since both gargoyles had been raised communally, neither one was aware of their relationship, nor would they have cared too much if they had been. Rather, Brooksbro would consider Goliath and Demona his siblings. ("Tyrants", "Phoenix")

By 1020, Brooksbro was one of just six remaining gargoyles in the Lunfanan Cell. Under Demona's leadership, his clan raided human food stores and farms to survive. ("City of Stone Part One") In 1040, he survived an attack on the clan in their cave roost by Duncan and his men. The clan was forced to move to a new lair and a new territory. ("City of Stone Part Three")

Shortly thereafter, the clan assisted Macbeth in his battle against Duncan. After their victory, Macbeth placed the clan under his protection, hoping for a new golden age between humans and gargoyles.

Unfortunately, only seventeen years later, in 1057, the clan was at war with humans again, this time with Canmore and his English allies. Brooksbro continued to fight alongside his clan. Sadly, Demona betrayed Macbeth to Canmore, giving Canmore the opportunity to betray her. Canmore and his men destroyed Brooksbro and the rest of the clan, leaving Demona without a clan. ("City of Stone Part Four")

Brooksbro was a dull tan colored gargoyle. Aside from coloring, he is very similar in appearance to Brooklyn, except that his wings were different and his horns split into two "branches" about halfway up. Like Brooklyn he had white hair and a large beak. He sports facial hair beneath his beak. In addition to his loincloth, he wears a low cut tunic with a single shoulder strap. All of his garments are blue.

The name "Brooksbro" was used only in the scripts for the comics to differentiate this character from other gargoyles. It is never used in the TV series or the actual text of the comics. It is obviously a shortened form of "Brooklyn's brother". The name can be a little confusing, since he is not the gargoyle who Brooklyn refers to as "bro," though he is present in that scene.