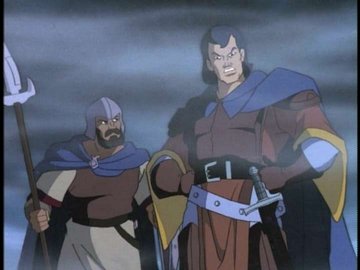 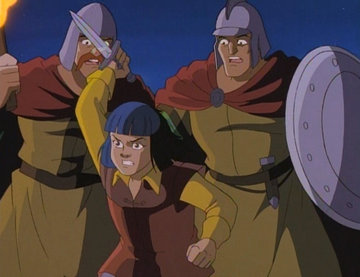 Canmore (full name Malcolm Canmore) was the son of Duncan, and the third Hunter.

Malcolm Canmore was born around 1032. In 1040, after Macbeth slew Duncan and became King of Scotland, Canmore was banished to England, taken in by his relatives there. ("City of Stone Part Three") He vowed revenge on both Macbeth and Demona for slaying his father and (as he saw it) cheating him of his inheritance. In 1057, he proceeded to seek out that revenge by invading Scotland with the aid of the English, taking up the mask of the Hunter as he did. For reasons of her own, Demona decided to betray Macbeth and made an alliance with Canmore. Canmore finally defeated Macbeth thanks in part to Demona and her clan abandoning Castle Moray when it was assaulted. But Canmore betrayed Demona as well. After having the gargoyles in Demona's Clan slain, Canmore intercepted Macbeth and Gruoch in their flight from Castle Moray and stabbed Macbeth in the back while he was berating Demona for her treachery, temporarily "slaying" both of them. Learning afterwards of Luach's approach with reinforcements, Canmore retreated temporarily, but the following year, he overthrew Luach and became King of Scotland, as Malcolm III, at last. ("City of Stone Part Four")

At some later point, there was a "little mishap" with Demona, Canmore and his son, Donald that led to the Hunt being resumed. [1]

Malcolm Canmore, also known as Malcolm III, is a historical figure, who ruled over Scotland from his defeat of Luach in 1058 to his death in 1093. (He was consistently called "Canmore" throughout the series to avoid confusion with Prince Malcolm; "Canmore" is Gaelic for "Great Head"). As in Gargoyles, he was Duncan's eldest son, and escaped to England in 1040 after Macbeth triumphed over Duncan. In 1054, he and his uncle, Earl Siward of Northumbria (who does not appear in Gargoyles, but does appear in William Shakespeare's Macbeth) began the war with Macbeth to win back the Scottish throne, culminating in his final victory over Macbeth in 1057 and that over Luach in 1058.

Shakespeare treats Malcolm Canmore almost with kid gloves (in part because James I of England was descended from him), portraying him as a noble prince and promising king, in a manner that most Gargoyles fans would scarcely recognize; the historical Malcolm Canmore seems to have resembled his Gargoyles counterpart much more closely. He was a strong ruler, however, and is particularly noted for having helped bring Scotland more into the mainstream of European culture. In particular, under the influence of his second wife, St. Margaret of Scotland (an English princess of the old royal family of Edward the Confessor, who fled to Scotland following William the Conqueror's takeover of England in 1066, and eventually married Malcolm), he introduced the Roman Catholic Church into Scotland, which replaced the older, more Celtic Christian practices that had prevailed there prior to his reign.