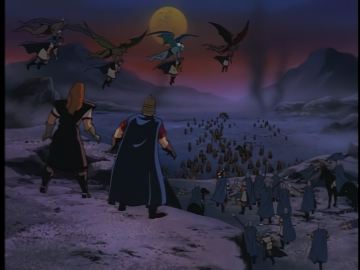 The Battle of Bothgoanan was fought near the town of Elgin, in Moray, Scotland between the forces of Moray led by Macbeth against Duncan. [1] Thanks to Macbeth's alliance with Demona and her clan of gargoyles, Duncan was slain.

Shortly afterward, Macbeth was crowned king of Scotland, and he named Demona because, in the battle, she "fought like a demon". ("City of Stone Part Three")

While not named in the episode, the battle is referenced taking place at Bothgoanan in Greg Weisman's "City of Stone" outline notes. [2]