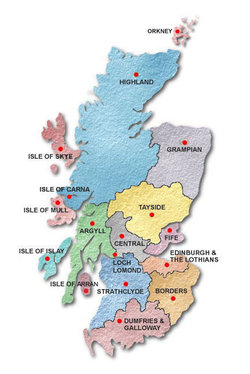 A map of Scotland

Scotland is an area in Europe, the northern section of the island of Great Britain and part of the United Kingdom.

Gargoyles have lived in Scotland for many hundreds of years, and clans were probably well established in the area long before the first humans migrated to the region.

According to an account by Shari, Prince Fergus, an Irish descendant of Gathelus and Scota, traveled to Scotland around 500 AD to found the new kingdom of Dalriada, bringing with him half of the Stone of Destiny.

Some three hundred and fifty years later, one of Fergus's descendants, Kenneth mac Alpin became the first King of Scotland and he and his descendants would rule the land for centuries, each being crowned upon the Stone of Destiny (until Edward I bore it away to Westminster Abbey during a war with Scotland in 1296).

Scotland was once home to the Wyvern Clan, the Scone Clan, and Demona's Clan among many others. Due to general human intolerance, betrayal, and displacement (not to mention an eradication program initiated by Constantine III and continued by Duncan and Canmore) the gargoyle population in Scotland was nearly decimated and by 1996, the Loch Ness Clan was the only remaining gargoyle clan in all of Scotland. [1] By 2198, a new gargoyle clan will be founded on Wyvern Hill in Scotland. [2]

Scotland is bordered in the south by England, in the west by the Atlantic Ocean and the North Channel, and in the north and east by the North Sea. Neighboring countries include Ireland, Denmark, Norway, and Iceland.

Scotland is named for the Scots, a Gaelic-speaking tribe who migrated from Ireland around A.D. 500. The principal inhabitants of Scotland in the first millennium A.D. were various Celtic tribes from England and Ireland, a people called Picts who may also have been Celtic, and the Anglo-Saxons of Northumbria. In A.D. 80 the Romans invaded Scotland, but they had little success. During the ninth through eleventh centuries, Viking raiders and settlers played a part in Scottish history as well.

In 843 Kenneth mac Alpin, an ancestor of Macbeth, Duncan, and Constantine III, became king of both the Picts and the Scots, and of a united kingdom later called Alba. The strife between Macbeth and Duncan was part of a pattern of violent succession among Kenneth mac Alpin's descendants in the tenth and eleventh centuries, probably related to the Scots' lack of a primogeniture custom.

Scotland defended its independence from England for several centuries. One of the most famous Scottish heroes was William Wallace, who led a revolt after Edward I of England invaded the country. Another was Robert the Bruce, who won a major victory against the English at the Battle of Bannockburn in 1314. Even when the Stuart king James VI of Scotland, a descendant of Canmore, became King James I of England in 1603, the two kingdoms remained separate. Scotland was not united with England until the Act of Union in 1707, during the reign of Queen Anne, when the separate Scottish Parliament was formally dissolved and the Scots began electing representatives to the United Kingdom parliament. Since then, some national groups have advocated for complete independence from England, while others have preferred to remain in the United Kingdom. A new Scottish Parliament was elected in 1999, but Scotland remains subject to the Westminster Parliament as well.