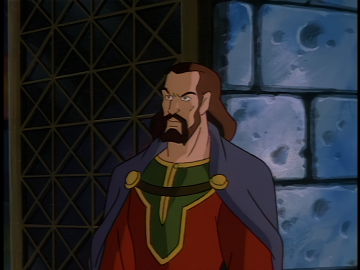 Malcolm was the third and youngest son of King Maol Chalvim I of Scotland (942-954), born in 954 at Edinburgh after his father's death. At that time, he and his mother, Queen Katharine, were hostages, held by the usurping Indulf to ensure his hold on the Scottish throne. Malcolm remained a hostage at court until 962, when he and his friend Robbie together worked out his escape, and thereby brought about Indulf's enforced abdication and the accession of Malcolm’s older brother Duff to the throne.

For the next five years, Malcolm was raised at court, being trained for his duties as a Scottish prince, and taken about Scotland to learn its ways and its peoples, including being introduced to various gargoyle clans (probably including the Scone Clan) and even catching a glimpse of the Loch Ness Monster. But in 967, Duff was slain in battle against Indulf's son Culen, who then seized the throne; Malcolm and his older brother Kenneth were driven into exile at Northumberland Keep in northern England.

In 971, at Robbie's advice, Prince Malcolm sought out the gargoyles under Hudson's leadership at Wyvern Hill, and formed an alliance with them; in return for the clan's aid to Kenneth and Malcolm against Culen, Malcolm would protect them from danger. After the defeat of Culen and Kenneth becoming King of Scotland as Kenneth II, Prince Malcolm built Castle Wyvern and made it his home, dwelling there with his people alongside the gargoyles. ("Once Upon A Time There Were Three Brothers...")

Malcolm remained a loyal ally to the Wyvern Clan, although perhaps not the most intelligent one possible. He was for a long while blind to the menace of the Archmage, who, while playing the part of his chief advisor, was scheming to depose him, and also foolishly used the gargoyles as means of frightening his daughter Katharine into good behavior, thereby helping to sow the seeds of prejudice in her that would have fatal consequences in 994. ("Long Way To Morning") It is possible that he may have given names to Hudson and a handful of his warriors, though over time only Goliath's was still used. [1]

Prince Malcolm married Princess Elena in 975. ("Vows") Princess Katharine was their only child. In 984, the Archmage made his attempt to overthrow Malcolm, failed, and was banished; however, he returned to vengefully poison the Prince with a venomed blow-dart. Fortunately, Goliath, Hudson, and Demona managed to recover the Grimorum Arcanorum from the Archmage, and the Magus used a spell from it to cure the Prince. ("Long Way to Morning") Malcolm, however, did indeed die at some point between 984 and 994, from causes as yet unknown.