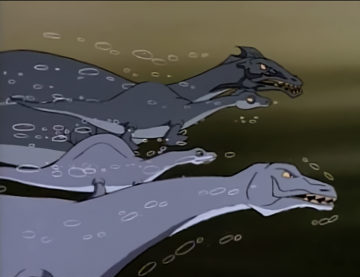 The Loch Ness Monsters are famous plesiosaur-like creatures living in Loch Ness, a lake in Scotland.

The creatures have apparently inhabited the loch for centuries if not much, much longer. Saint Columba tamed one of them in the 6th century. ("Rock & Roll") Later, in the 10th Century, Robbie and the young Prince Malcolm may have encountered them as well. [1] They seem to have been watched over and protected by gargoyles of the Loch Ness Clan since antiquity. [2][3]

In 1996, David Xanatos sent his Commandos to search the Loch for the creatures. When a female was finally captured, Dr. Sevarius came to Scotland and named her "Nessie". He planned to use her as bait for the alpha-male member of her family, "Big Daddy". He also had plans to use "Nessie's" genetic material to create various unusual monsters. Fortunately, Goliath, Elisa, Angela, and Bronx rescued Nessie (whom Angela had befriended) and prevented Sevarius from kidnapping her mate "Big Daddy" when they visited the region as part of the Avalon World Tour. ("Monsters")

As the Loch Ness Monsters are usually safeguarded by the members of the Loch Ness Clan, it is currently unknown where they were when the creatures were being menaced by Sevarius. They were aware of "Nessie" was missing, but not the cause of the creature's disappearance. [4]

The Loch Ness Monsters are plesiosaur-like animals presumably directly related to the marine reptiles of the Mesozoic Era (Greg Weisman hints they might not be the only extant species from that time). [5] They are streamlined in shape with flippers and long necks. Their jaws have many teeth to aid them in hunting fish, their primary prey. There seems to be a large degree of sexual dimorphism. The males are a darker grey in color than the females and have a sort of bony crest on their heads that the females lack. The creatures form family bonds and males and females assist in raising the offspring.

The first record of a Loch Ness Monster occurs in a medieval life of St. Columba, who in A.D. 565 is said to have saved a swimmer from such a creature; of course, it is uncertain as to whether this is a true story or merely a legend that became attached to a noteworthy figure. The monster first came to prominence in 1933, thanks in part to the building of the A82 near the loch, which allowed travellers a better view of Loch Ness. Nessie-sightings soon began to appear, as did the famous "Surgeon's Photograph" in 1934 - which has, however, recently been exposed as a hoax. Many expeditions have gone to the loch to determine if "Nessie" is real or not, but so far they have all been unsuccessful. It is entirely possible, alas, that the Loch Ness Monster may only exist in the Gargoyles Universe, and not in real life.