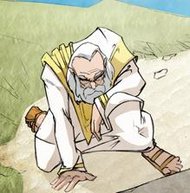 Saint Columba was an Irish missionary in Scotland during the 6th century.

According to a tale told by Shari, Columba tamed the Loch Ness Monster. Returning afterwards from Scotland to Iona, he died on June 9, 597 resting his head upon the Stone of Destiny. ("Rock & Roll") [2]

Columba (also known as Colm Cille) was born in Donegal around 521, and became a famous saint when he grew up. In 563, he left Ireland with twelve followers to found a monastery on Iona. Legend claims that he did so because he had been banished from Ireland thanks to the "Battle of the Book"; Columba had copied a Gospel belonging to St. Finnian, who demanded the copy, and when the matter was submitted to the High King Diarmaid, Diarmaid decided for Finnian with the words "To every cow her calf and to every book its copy". Columba (already angry with Diarmaid for killing a man who had taken sanctuary with Columba) sent an army against Diarmaid, in which Diarmaid was heavily defeated. Columba, however, was guilt-ridden over the slaughter that he had caused, and so went into exile to Iona.

From Iona, Columba began missionary work among the Picts in Scotland. During this time, he is said to have tamed a great water-monster in the river Ness (since linked to the Loch Ness Monster). Columba died on Iona in 597.