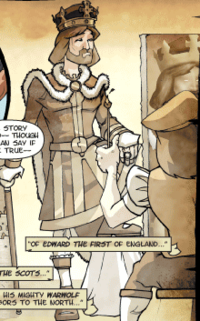 Edward I was the King of England who seized the Stone of Destiny from the Scots in 1296 and bore it away to Westminster Abbey.

Edward was nicknamed "the Hammer of the Scots". He carried off the Stone as part of a war on Scotland he was waging at the time. One of his weapons against the Scots was the Warwolf.

Edward I was King of England from 1272 to 1307. One of the strongest of England's medieval kings, besides carrying off the Stone of Destiny, he was also noted for conquering and annexing Wales (building many castles in the north of Wales to keep it under control), reforming the English legal system (which earned him the nickname "the English Justinian"), assembling the Model Parliament in 1295, expelling the Jews from England in 1290 (they remained exiled until the 17th century), building the Eleanor Crosses to mourn the passing of his wife, Eleanor of Castile, and attending the installment of the purported remains of King Arthur Pendragon and Queen Guinevere (although Greg Weisman has mused that they were actually Guinevere and Lancelot) at Glastonbury in a marble tomb on April 19, 1278. [1]

"The Hammer of the Scots" was a real nickname of Edward I. He was also known as "Longshanks".