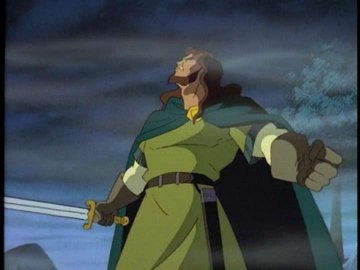 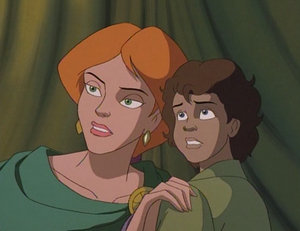 A young Luach with his mother in 1040

Luach was the son of Gruoch by either Gillecomgain or Macbeth; nobody is certain as to who Luach's father was. [1][2]

He was born around 1032, and raised by Macbeth as though he were his own son. Luach (ironically, if he was indeed Gillecomgain's son) was fiercely loyal to Demona and her clan, and supported them in 1057 after they had helped to valiantly fight Canmore and his forces.

After Macbeth was "slain" by Canmore, Bodhe declared Luach the new King of Scotland. He fought against Canmore and his English allies, but was at last slain in battle the following year. ("City of Stone" Part Four)

Luach, more often known in real-world history as Lulach, was indeed a real person, the son of Gruoch by her first marriage to Gillecomgain. He was known as Lulach the Simple, although how deserved this title was, we do not know. He briefly became King of Scotland following Macbeth's death in 1057, but was slain fighting against Malcolm Canmore the following year. A grandson of his, named Angus, attempted unsuccessfully to win back the Scottish throne in 1120.