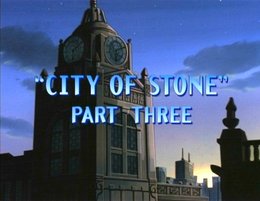 "City of Stone" Part Three is the twenty-fourth televised episode of the series Gargoyles, and the eleventh episode of Season 2. It originally aired on September 20, 1995.

This episode marks the climax of the "City of Stone" story. In the present, Xanatos concocts a plan to break Demona's spell, while in 1040 the magical link between Demona and Macbeth is established by the Weird Sisters, who have themselves pushed the two towards their fates with subtle interference. They had appeared as three old witches straight out of Shakespeare to Macbeth and King Duncan, announcing that Macbeth would overthrow his cousin. Fearing the prophesy of the Sisters, Duncan gathers his army against Macbeth. Left with no options, Macbeth makes a pact with Demona, exchanging his youth for Demona's aid against Duncan. With the help of the gargoyles Macbeth wins the battle and becomes king after he slays Duncan. He names Demona his primary adviser, bringing about a golden age between humans and gargoyles; an age that sadly would not last.

Macbeth saves Duncan's life when he nearly falls off a cliff, just before coming across Demona and her clan sleeping in a cave. Macbeth prevents Duncan from killing them, but Duncan returns later that day to destroy them, fearing that Macbeth would recruit them to fight against him. He's able to destroy one gargoyle before sunset and the others retreat. Duncan's actions backfire against him, driving the gargoyles out of hiding and motivating Demona to take action and seek out the Weird Sisters for help.

Selene gives Macbeth a magical sphere right after he is linked with Demona, and informs him that Duncan had ordered Findlaech's murder. Duncan is killed when he hits the sphere with his sword while trying to kill Macbeth.

Canmore demands to be made King, and is banished to England. Just before he is taken away, he steals his father's mask from Demona, ensuring the continuation of the Hunter's line.

Demona is given her name by Macbeth during his coronation.

Back to the present, Elisa goes to confront Xanatos at PackMedia Studios and becomes stone along with Owen just as the gargoyles awaken. The gargoyles and the Steel Clan are equipped with gas dispensing packs that they fly through the city with. The packs would explode at a preset time controlled by a computer, giving the gargoyles enough time to disengage before the gas is ignited. Right after they leave, Demona enters through a hidden passageway, and stalks towards Elisa with a mace.

"'All who see this, all who hear this; turn to stone throughout the night. Until the skies burn.'"
"Then we'll just have to set the sky ablaze." - Xanatos and Owen

"I am uninterested in a question." - Macbeth and Demona

"Aye. So the battle is truly over; for both of us." - Demona and Macbeth

"He will be trouble. Slay him now." - Canmore and Bodhe

Travis Marshall makes another guest appearance, delivering a news report on the mysterious events of the previous night.

The woman that didn't turn to stone and tries to tell Travis Marshall this looks very similar to the woman who worked at the Diamond Exchange in "Her Brother's Keeper". Greg Weisman has stated, "I don't think it was the same woman from the Diamond Exchange. The voice here was Rachel Ticotin's." [1]

The man pleading with the Weird Sisters (in their policewoman disguise) to explain to him about his "lost night" looks very much like Billy and Susan's father from "The Thrill of the Hunt".

"City of Stone" Part Three provides the only scene in Gargoyles where one of the Weird Sisters acts separately from the other two, when Seline gives Macbeth the glowing ball that will bring about Duncan's doom, while informing him that Duncan had employed Gillecomgain to murder Findlaech. (Since Seline represents the Weird Sisters' vengeance aspect, it is appropriate that she should be the one to take on this role.)

Macbeth is crowned upon the Stone of Destiny (also known as the Stone of Scone), according to ancient Scottish custom. The Stone is mentioned again in "Avalon" Part One, but does not reappear until "Pendragon". The coronation itself would be shown again in flashback in both "The Rock" and "Rock & Roll", though on both occasions, depicted as outdoors rather than indoors, to better fit real Scottish coronation ceremonies. Greg Weisman later considered that, in the series, Macbeth may have done the coronation a second time "for show". [2]

Xanatos's remark that "mixing magics is dangerous" is another hint about Owen's true identity (the "mixing magics" part deriving from the fact that Puck's magic comes from his being one of the Third Race, while Demona's spell came from a source of human magic, the Grimorum).

In this episode we finally learn the circumstances in which Macbeth gave Demona her name, previously mentioned in "Enter Macbeth".

The revelation that Demona's magic spell has a "termination clause" harks back to "Awakening: Part Two", in which the stone sleep spell has a similar clause.

Duncan's red-haired second-in-command is left nameless in the dialogue, but called "Macduff" in the ending credits - a reference to the "Macduff, Thane of Fife" in Shakespeare's play who slays Macbeth.

Macbeth and Gruoch's son Luach is introduced in this episode. In actual history his name was Lulach (the second "l" was somehow lost during the creation of "City of Stone"), and he was really Macbeth's stepson, the product of Gruoch's first marriage to Gillecomgain. Greg Weisman has mentioned seeing Luach's actual parentage in the Gargoyles Universe as uncertain; his father might have been Macbeth, or might have been Gillecomgain, but nobody knows for certain.

The Weird Sisters have their most Shakespearean moment in this episode, when they recite the "Double, double, toil and trouble/ Fire burn and cauldron bubble" lines from Macbeth (Act Four, Scene One) and greet both Duncan and Macbeth with the words "All hail [Duncan/Macbeth], King of Scotland and father of the king hereafter!", echoing their words to Macbeth in Act One, Scene Three: "All hail Macbeth! That shalt be king hereafter!"

Macbeth anachronistically calls the Weird Sisters "three old bedlams"; the word "bedlam", associated with madness, derives from the mental hospital of St. Mary of Bethlehem - which did not become a mental hospital, however, until 1547, a little over five hundred years after Macbeth's victory over Duncan. Since all of the "City of Stone" flashbacks took place in a Gaelic-speaking period of Scottish history, this might be counted as an anachronistic translation rather than a true anachronism. Michael Reaves thought the word should have been "beldam", which means "hag" or "old woman", and he and Greg Weisman briefly debate the semantics on the commentary of this episode on the DVD.

Duncan's fiery death was designed to provide some variety from the "falling off a great height" deaths that had already befallen Hakon, the Captain of the Guard, Findlaech, and Gillecomgain, while still being acceptable to Standards and Practices (in the way that Macbeth running Duncan through with a sword would not). Ironically, in his death-throes, Duncan falls off the ledge upon which he and Macbeth were standing; apparently some habits are hard to break. [3]