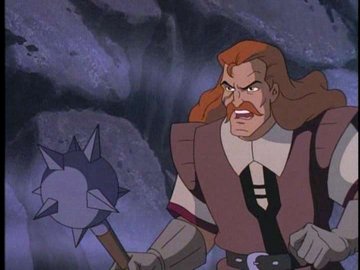 Macduff was born in 1005. [1] He fought for Duncan against Macbeth in 1040, and tried to stab Macbeth in the back while Duncan attacked him in the front, only to be incapacitated by Demona.

Macduff is presumably the Gargoyles equivalent of the Macduff of William Shakespeare's Macbeth, although obviously not quite identical to him. The Shakespearean Macduff, Thane of Fife, slays Macbeth in Shakespeare's play, being the only one able to do so since he was not "of woman born", but "from his mother's womb untimely ripped", via Caesarian section. This does indeed parallel the Macbeth of Gargoyles, who can similarly only be slain by one who was not born of woman - namely Demona, who was hatched from a gargoyle egg.