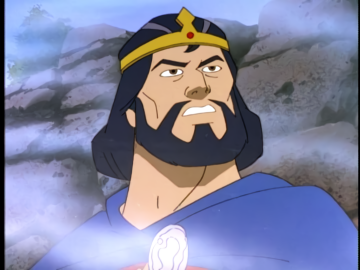 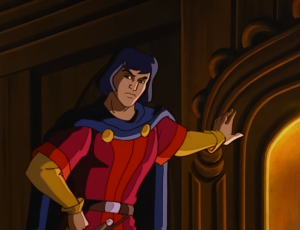 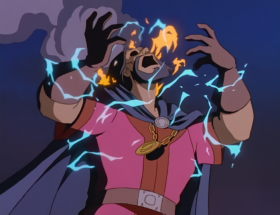 Duncan was a grandson of Maol Chalvim II, through his oldest daugher Bethoc, and cousin of Macbeth. [1] By 1020, he was already the heir apparent to the Scottish throne (after potentially "incapacitating" Maol Chalvim to some degree), but feared that Findlaech would make Macbeth King of Scotland instead. [2] To prevent this, he employed Gillecomgain the Hunter to assassinate Findlaech, and bestowed upon him the High Stewardship of Moray as a reward. ("City of Stone Part One")

In 1032, after Duncan's oldest son Canmore was born, Duncan decided to ensure all the more that Macbeth would not be able to steal the throne from him by commanding Gillecomgain to murder Macbeth. When Gillecomgain refused, Duncan retaliated by informing Macbeth that Gillecomgain was the Hunter who had murdered Findlaech, resulting in Macbeth slaying Gillecomgain for him. Duncan afterwards succeeded Gillecomgain to the role of the Hunter. ("City of Stone Part Two")

By 1040, Duncan had become King of Scotland at last. While out for a stroll on the heath with Macbeth and their sons, Canmore and Luach, he first learned of Macbeth's alliance with Demona (when he came upon her and her clan in their stone sleep), and then encountered the Weird Sisters, who prophesied that Macbeth would someday be King of Scotland. His suspicions towards Macbeth aroused once more, Duncan promptly determined to destroy him for good, and also decided to destroy Demona's clan in case Macbeth allied with it against him. His attack upon both Clan Moray and the gargoyles forced Macbeth and Demona to become allies, and they joined forces to defeat him in battle. In that battle, Duncan was finally slain when he brought his sword down upon a magical ball that Seline had given Macbeth, which responded by destroying him in a blast of fire. ("City of Stone Part Three")

Duncan was a historical figure, who was indeed slain by Macbeth in battle in 1040. He seems to have been a weak king, and as much of a tyrant in some ways in real history as he was in Gargoyles. Shakespeare whitewashed Duncan in his play Macbeth, however, portraying him as a just and kindly old man, and having Macbeth murder him in his sleep rather than overthrow him on the battlefield - the manner of Duncan's murder in the play, incidentally, seems to have been borrowed from an account in Holinshed's Chronicles of the murder of King Duff. A great deal of Shakespeare's portrayal of Duncan in a more favorable light seems to have stemmed from the fact that he wrote the play during the reign of Duncan's descendant, James I of England and VI of Scotland.