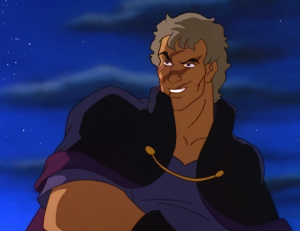 Gillecomgain was the first Hunter. 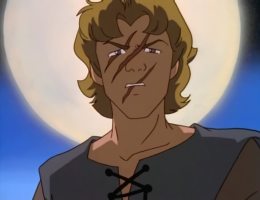 Born in 982, Gillecomgain was a young peasant boy living near Castle Wyvern in 994 with his father, Maíl Brigti. [1] He had the misfortune to come upon Demona as she was stealing food from the stables shortly after the Wyvern Massacre, and she promptly slashed him in the face, permanently scarring him, then said "That'll teach you humans". In absolute bitterness, he vowed revenge upon both Demona and her entire race. ("City of Stone Part One", "Hunter's Moon Part One")

Gillecomgain's hatred for gargoyles led him to enter the service of Constantine after he became king; by 997, Gillecomgain had become his squire and assisted him on his anti-gargoyle raids, shattering stone gargoyles with a fury that impressed Constantine. Constantine was even inspired by Gillecomgain's facial scars to create the terrifying visage for himself at the Battle of Rathveramoen that would inspire the Hunter's mask. Gillecomgain fought fiercely in the battle, trying to slay the young Bodhe. During the fighting, his father was slain by the fiery arrows conjured up by Brother Valmont; Gillecomgain blamed Findlaech for this death, however. ("The Gate", "Tyrants", "Phoenix")

When he grew up, Gillecomgain made good his vow by becoming the Hunter, and hunting down Demona. Though it was Demona who gave him his drive and focus, it was his father who gave him the darkness.

He also entered Prince Duncan's service as a paid assassin, however, and in 1020, murdered Findlaech for him. Duncan rewarded him by appointing him High Steward of Moray, and twelve years later, saw to it that he married Gruoch. ("City of Stone Part One", "City of Stone Part Two") 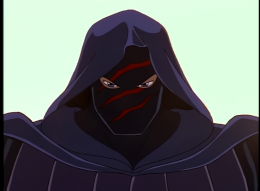 Gillecomgain may have been the father of Luach by Gruoch, although Luach's paternity remains uncertain. [2][3]

Gillecomgain was a historical figure, who indeed did murder Findlaech in 1020, marry Gruoch, become by her the father of Luach, and was finally slain in 1032. He was also a kinsman of Findlaech and Macbeth, which did not enter Gargoyles canon, however, until "Phoenix".