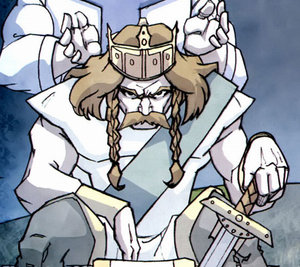 Kenneth mac Alpin was the first King of Scotland.

Kenneth was a descendant of Fergus, the Irish prince who founded Dalriada. He united the various kingdoms of Scotland, and was crowned upon the Stone of Destiny at Scone. ("Rock & Roll")

Kenneth mac Alpin was crowned the first High King of Scotland in 843. He was originally only king of the Scots of Dalriada, but also lay claim to the Pictish kingdom which dominated most of Scotland at the time. According to legend, he seized power through treachery; at a banquet in Scone, he seated the chief Pictish nobles upon benches with trap doors fitted in them, over hidden pits. At Kenneth's signal, his men activated the trap doors, sending the Picts falling into the pits, where they were easily slain.

Kenneth reigned until 860, when he was succeeded by his brother, Donald I.

He was the great-grandfather of Maol Chalvim I, and thus an ancestor of Macbeth.