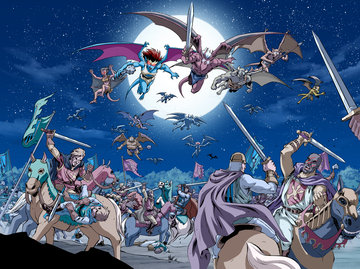 The Battle of Rathveramoen was a great battle fought in Scotland between the armies of Kenneth III (aka "The Grim") and the legions of Constantine III on October 18th, the night of the Hunter's Moon, in 997. [1]

Alongside some Scotsmen, Constantine had the aid of many Irish forces. This left the Grim's forces outnumbered, and so he made a bargain with a TimeDancing Brooklyn, who successfully managed to convince Demona and her clan to intervene and attack Constantine.