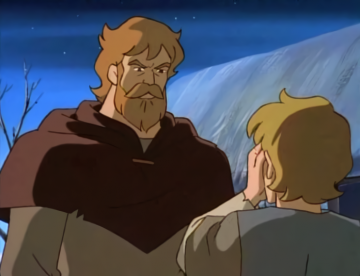 Maíl Brigti was a human male peasant in 10th century Scotland, and the father of Gillecomgain. He was also Findlaech of Moray's older half-brother.

Ruaidri fathered Mail Brigti upon a peasant woman, apparently out of wedlock; because of this, Ruaidri bestowed all his lands upon Findlaech, leaving Mail Brigti out of his succession. Findlaech offered to share the family estates with him, but Mail Brigti wanted them all.

In 994, shortly after the Wyvern Massacre, Demona raided his stable in search of food and slashed his young son, Gillecomgain, across the face, permanently scarring him. ("City of Stone Part One")

Gillecomgain ran to show his father the wounds, but the older man dismissed the boy's claim and chastised him for complaining about a few scratches. While Gillecomgain was adamant that he had been attacked by a monster or demon, his father more reasonably (and correctly) said that it was probably a rogue gargoyle in search of food, suggesting he may have had some experience of gargoyles previously. ("Hunter's Moon Part One")

By 997, he and his son were in the service of King Constantine, fighting against Maol Chalvim, Kenneth III and his younger half-brother Findlaech. He was killed by a torrent of bewitched arrows conjured up by Brother Valmont at the Battle of Rathveramoen. ("Tyrants", "Phoenix")

Maíl Brigti was a real person, about whom very little is known, though he is thought to be a kinsman of Findlaech and Macbeth. Two of his sons, Maol Chalvim mac Maíl Brigti and Gillecomgain, became Mormaer of Moray (both after the death of Findlaech, but before Macbeth's rise to power).