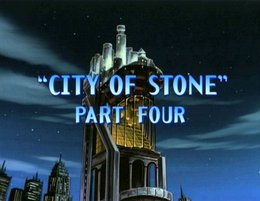 "City of Stone" Part Four is the twenty-fifth televised episode of the series Gargoyles, and the twelfth episode of Season 2. It originally aired on September 21, 1995.

Bodhe mentions that the English had already wiped out all the gargoyles in England; it will be revealed in "M.I.A." that he was mistaken, since at least one clan (the London Clan) lived on in hiding. This is the first time in the series that it is indicated that there were gargoyles native to regions other than Scotland.

At the end of the episode, Demona and Macbeth are taken away by the Weird Sisters, to be used as foot soldiers for the Archmage. They will remain under the Sisters' control until "Avalon" Part Three.

The link between Demona and Macbeth ties subtly in with Shakespeare's play. In Shakespeare's Macbeth, the Three Witches tell him that "none of woman born" can kill him, which Macbeth misinterprets as meaning that he is invulnerable - until he discovers that his sworn foe, Macduff, was "from his mother's womb untimely ripped", i.e., born through Caesarian section. Demona, the only person who can kill the Macbeth of Gargoyles, was hatched from a gargoyle egg, which makes as good a loophole as Macduff's birth. (According to Greg Weisman, there were plans at one point to mention this in City of Stone, but these were dropped for lack of time. So also were plans to adapt the Birnam Wood sequence from Shakespeare's play into the story.)

In actual history, Canmore overthrew Luach in 1058 (the year after Macbeth's final defeat) and became King of Scotland (an event hinted at in the Weird Sisters' words to Macbeth near the end of this episode - "Did your own death save Luach from Canmore?"). He ruled until 1093, when he was slain in battle against the English (who had by this time been conquered by the Normans, so that he was not actually at war with his former allies, but with their subjugators) - at least, officially, his slayers were the English. From the perspective of the Gargoyles Universe, on the other hand, one wonders whether Canmore's death may have come from the hands of another party, something that would explain certain developments much later on in the series...