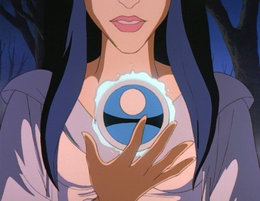 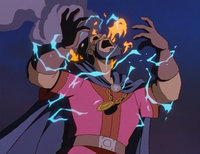 Duncan's death, as a result of striking Seline's orb.

Seline's Orb is a magical sphere given to Macbeth by Seline, one of the Weird Sisters.

Seline conjured the orb in 1040, shortly after she (along with Phoebe and Luna, the other Weird Sisters) used their magic to bind Macbeth and Demona into an eternal covenant. At the time, King Duncan had declared war on Macbeth's people, Clan Moray, and Macbeth needed aid from Demona's Clan in order to protect his people and his family. However, despite the threat from Duncan, Macbeth was still loyal to him as High King of Scotland as well as his cousin.

Once the magical covenant was in place, and her fellow Sisters had disappeared into the mist, Seline conjured up the orb (whether she created it then or summoned it from elsewhere is unknown) and passed it to Macbeth, saying: "And know this: when Duncan spoke, Gillecomgain was quick to do his bidding. Duncan ordered your father's murder."

(Seline's giving of the orb is one of the few instances in which one of the Weird Sisters acts, apparently, autonomously from the other two. It represents Seline's aspect as the Weird Sister of Vengeance, or Fury, in that she is giving Macbeth both the incentive to exact revenge on Duncan and the means to do so.) [1]

In the subsequent battle, Macbeth threw the orb at Duncan, who brought his sword down on it. He was destroyed in a blast of flame. ("City of Stone Part Three")

The idea of the orb was created by the production staff to add some variety to the deaths in the series. Since Standards and Practices would never allow anyone to be killed by being stabbed with a sword, the most common method of dispatching characters was for them to fall from a great height (examples of these mode of death include: Hakon and the Captain of the Guard in "Awakening Part Two", Findlaech in "City of Stone Part One", and Gillecomgain in "City of Stone Part Two"). Ironically, during his death throes, Duncan does still step off a cliff and tumble into the darkness below. [2]