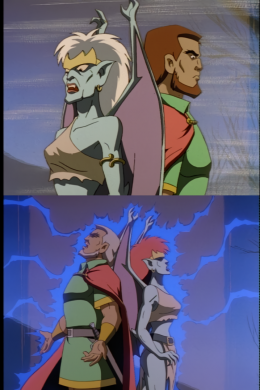 Demona and Macbeth being magically linked.

In 1040, an aged Demona yearned for the strength of her youth, while Macbeth and Clan Moray were on the eve of being crushed by Duncan's forces. The two of them agreed to an alliance in which Macbeth would trade his youth in exchange for Demona's aid in defeating Duncan.

The Weird Sisters brokered the deal, but at the command of the Archmage (as well as their own reasons), they also made Demona and Macbeth immortal, unable to die except by the other's hand. [1]

Demona and Macbeth are immortal and unable to age. Demona is permanently the equivalent of a thirty-five year old by gargoyle terms, while Macbeth is stuck at fifty-two. When they are in close proximity with each other, they will feel the other's pain, and to a lesser extent, pleasure. [2]

The rate that either of them heal depends entirely on the wound. A severe, or fatal wound, is likely to activate the spell and accelerate their healing. However, a minor wound will heal at a natural rate for both of them. Before she began turning into a human during the day, Demona was likely to be fully healed after a day's stone sleep, while the biologically older (and human) Macbeth would take a little longer. [3]

The "when one lives, both shall live" condition means specifically that no one else can kill them. Because as long as one of them is alive, the curse will drag the "dead" one back into life. ("Sanctuary")

Their link is not just immortality and healing, destiny is at work. Before Puck's Spell of Transformation, no one knows what would have happened if Demona were shattered during her stone sleep because such a thing never happened. Nor has she or Macbeth ever been beheaded, blown to bits, or suffered any other such catastrophic injury. [4] For example, when Demona fell from the Eyrie Building, she did not hit bottom and then heal, she managed to recover mid-fall and glide away. [5] The Weird Sisters didn't just bestow Demona and Macbeth with magical immortality, but they made a prediction: that they would both live, eternally linked, sharing pain and anguish with no relief until one destroyed the other. No one else will destroy them. [6] Luna is the Weird Sister of fate and knows what will transpire. [7]

The Weird Sisters are also unable to remove the link, and it is doubtful anyone else could either. [8]

Since Demona was hatched from a gargoyle egg, the dictate in Shakespeare's play that "none of woman born" may kill Macbeth holds true in the Gargoyles Universe, if with a different loophole.

Phoebe: Across the mists of space and time,
we pose this covenant sublime.

Seline: Macbeth his youth doth offer here,
to make this one a force to fear.

Luna: While she with fang and claw and wing
doth swear sweet death his foes to bring.

All: By their acceptance are they consigned
unto each other's fate designed,
forever and eternal bound,
and each the other's pain resound.