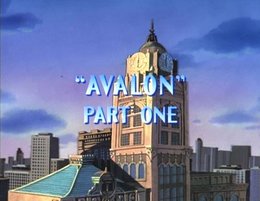 "Avalon" Part One is the thiry-fourth televised episode of the series Gargoyles, and the twenty-first episode of Season 2. It originally aired on November 20, 1995.

Many familiar "bit characters" make appearances in the episode (and have all the more reason to show up now, just before the series would take its long holiday from New York). Brendan and Margot are among the passers-by staring in astonishment at Tom in his armor, his confronters are the three street thugs from "Awakening: Part Three", and the policeman who arrests him is Officer Morgan.

Constantine mentions the Stone of Destiny in his coronation oath, but this time (unlike at Macbeth's coronation in "City of Stone" Part Three) the Stone does not appear.

Originally, the production team had considered having "The Eggs" secretly raised in Brigadoon, to better reflect the gargoyles' Scottish "nationality". After their research had discovered, however, that Brigadoon was purely a creation of the Lerner and Loewe musical and therefore not in the public domain, the Eggs' refuge became the isle of Avalon instead - which change led to the introduction of Arthur Pendragon in Parts Two and Three.

(Later on, when Greg Weisman wrote a Gargoyles parody for Captain Atom, he briefly mentioned Brigadoon in it, bestowing upon it the role that Avalon had in the animated series.)

Maol Chalvim's more familiar anglicized name in the history books is Malcolm II (King of Scotland from 1005 to 1034). His name was changed in the script for the same reason as Canmore's in "City of Stone", to distinguish him from Prince Malcolm.

Mary and Finella will next appear in "The Gate", "Tyrants", and "Phoenix", where we also see the end of Constantine's reign. Constantine and Maol Chalvim both return in those stories as well.

The Magus mentions Constantine having sorcerers in his employ; we will meet one of these, Brother Valmont, in "The Gate".

King Kenneth III was to debut in the episode, but was removed from the story. He would appear in "The Gate".