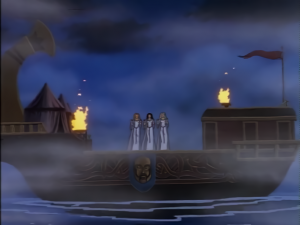 The Weird Sisters stand upon the barge.

The barge was a vessel anchored just off the coast of Avalon.

In 995, following Oberon banishing his Children from Avalon, he appointed the Weird Sisters to stand watch on the barge as guardians of the isle.

When Princess Katharine, the Magus, Tom, Mary, Finella, and the eggs journeyed to Avalon to escape Constantine and his forces, the Sisters denied them entry and attacked before the Magus warded them off. ("Avalon Part One")

Afterwards, the Archmages struck an alliance with the Sisters, and met them there again a thousand years later where they presented him with the Three Keys to Power. ("Avalon Part Two")

While its true significance remains unclear, the bearded face seen on the barge's side is the same individual that also inspired the carved skiff figureheads. [1]