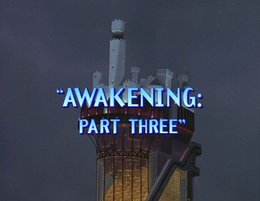 "Awakening: Part Three" is the third televised episode of the series Gargoyles, and the third episode of Season 1. It originally aired on October 26, 1994.

Elisa investigates the situation at the Eyrie Building, meeting Xanatos and eventually Goliath, who saves her life after she falls from the top of Castle Wyvern. After meeting the rest of the clan, Elisa convinces Goliath to let her show him the city as payment for saving her. They meet the next night, and take an aerial tour of Manhattan. They walk together through Central Park when they are suddenly ambushed by the Commandos that had fought with the gargoyles the night before.

The gargoyles begin to grow accustomed to modern-day life. The trio explore the kitchen in the castle, and make a mess, before going out to explore the city, while Hudson discovers the easy chair and television set with Bronx.

Xanatos tells Goliath that the Commandos who attacked earlier stole three important disks from him, and that they work for Cyberbiotics. He then asks Goliath for his clan's help in retrieving the disks from three separate locations. After Goliath leaves, Xanatos talks to a shadowy figure.

Hudson receives his name from a conversation with Elisa.

Goliath saves Margot and Brendan from three street thugs, and the couple promptly runs away, more afraid of Goliath than their attackers.

Lexington startles Vinnie and then accidentally crashes his motorcycle into a wall.

"My kind have no names, but you humans call me Goliath."
"Your kind? You mean there's more than one of you?"
"Barely." - Elisa and Goliath

"You're learning fast." - Goliath and Xanatos

"Its food!" - Lexington and Broadway

"You're judging it the way humans have judged you." - Goliath and Elisa

Brendan and Margot make their first appearance in Gargoyles here, as do the three street thugs (who would reappear in "Avalon" Part One and "Hunter's Moon" Part One). The yuppie couple are among the best-known of the various "recurring background characters" of Gargoyles, ordinary residents of New York who have the habit of cropping up again and again. At first they were introduced simply to make things easier for the animators, but soon the production team developed a fondness for making them into people who would encounter the gargoyles over and over, particularly Greg Weisman, who saw it as similar to the "universe of characters" concept found in The Simpsons and William Faulkner's Yoknapatawpha County stories. Brendan and Margot are not the first such "recurring background characters" to appear in Gargoyles, however; that honor goes to Officer Morgan in "Awakening: Part One".

Elisa comments when she first looks around Castle Wyvern, "Must have one heck of a heating bill". This remark bears a striking similarity to one made by Bugs Bunny in the 1959 Warner Brothers cartoon "A Witch's Tangled Hare", regarding, of all places, a ruined Scottish castle that he was strolling about in. Furthermore, "A Witch's Tangled Hare" contained a strong element of Shakespearean parody, primarily Macbeth, but with aspects of Romeo and Juliet and Hamlet thrown in as well. Was this line of Elisa's a deliberate homage to this short, or merely a coincidence? (While this question remains unanswered, later episodes of Gargoyles would contain tributes to another Warner Brothers cartoon character - Wile E. Coyote - in the form of Coyote and Vinnie.)

The Trio in the kitchen scene is partially cut. Specifically Brooklyn turning on a stove and almost burning himself as well as the three of them landing in a pile of pots and pans were cut out.