Gargoyles The Movie: The Heroes Awaken 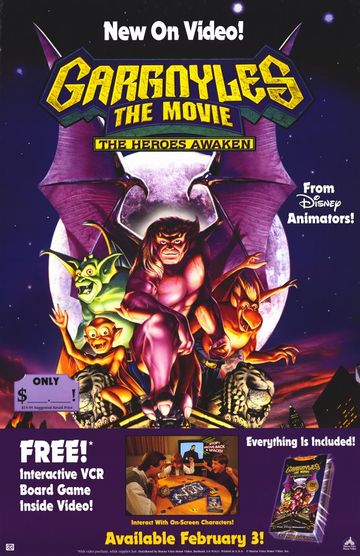 Gargoyles The Movie: The Heroes Awaken

Gargoyles The Movie: The Heroes Awaken is an 80-minute movie version of the "Awakening" five-parter that premiered at Walt Disney World in September of 1994. It was released on VHS and Laser Disk in 1995.

In 1994, while Frank Paur worked with editors and sound mixers on the five-part "Awakening" pilot, Greg Weisman was given the job of preparing a feature length movie-edit of the pilot for a September "World Premiere" at the Pleasure Island multiplex at the Walt Disney World park in Orlando, FL. To this end, he worked with a separate batch of editors and sound mixers to compile and compress the needed material and make it ready on time. [1]

Later, in 1995, when Buena Vista Home Video wanted to release the pilot on video and Laser Disk, they discovered there already existed a movie edit and released that version to home video, despite Greg Weisman's protestations. [2]

Scotland, 994 A.D. The inhabitants of a medieval castle are protected from ruthless invaders by a mysterious race of powerful and noble creatures. Stone by day, alive by night...they are the Gargoyles, led by the mighty Goliath and the beautiful Demona. However, the uneasy alliance between humans and Gargoyles is soon betrayed - and the Gargoyles are put under a spell for 1,000 years. But by whom?

Manhattan, 1994. One by one, a small clan of surviving Gargoyles finally awakens - only to find their castle resting atop a New York skyscraper owned by wealthy industrialist David Xanatos. Xanatos wants them to recover valuables stolen by Commandos. But after 1,000 years, can humans be trusted?

This thrilling edge-of-your-seat adventures is packed with special effects from Disney's legendary animators and the voice talents of Ed Asner - and Jonathan Frakes and Marina Sirtis from Star Trek: The Next Generations. And now you can swoop the Gargoyles up on video!

It's a race against time...as you glide the gritty streets of Manhattan - one spin at a time. You'll face danger, Gargoyle-style, attempting to stop evil..stone cold! But wait! The combined interactive video footage and "action cards" add to the excitement as you soar forward to apparent victory, or suddenly hurtle backwards through New York City subways! Regardless, Xanatos must not succeed. It's up to you!

Everything Is Included Inside!

Due to the different schedules and teams, and limitations as to what material would be finished in time for the premiere screening, there are a few differences between the two versions. These differences include: