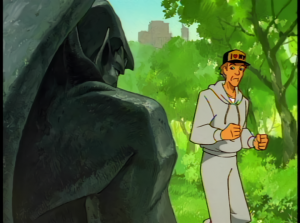 The Jogger is a human citizen of New York City, who spends much of his time jogging (often in Central Park).

The Jogger is William Greene's brother, and thus Billy and Susan's uncle. His last name is Greene, but his first name is currently unknown. [1]

He has often encountered Elisa and the gargoyles. The first time was in October, 1994. He claimed to have been running along the same path in Central Park for five years at that point. ("Awakening Part Four")

The Jogger has also sighted Oberon once (and couldn't believe his eyes when he did). ("The Gathering Part One")

He was interviewed about the gargoyles by Nightwatch following the Manhattan Clan's revelation to the world. In the interview, the Jogger expressed a morbid curiosity about the gargoyles, wondering as to their roots, and even brought forth the idea of capturing a gargoyle and dissecting it. ("Nightwatch")

In 1997, the Jogger was one of six injured following a Dracon Drug Lab explosion and was rushed to the hospital. ("A Little Crazy")