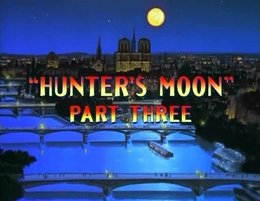 "Hunter's Moon" Part Three is the sixty-fifth televised episode of the series Gargoyles, and the fifty-second and final episode of Season 2. It originally aired on May 15, 1996. It was adapted into a Radio Play and performed at the Gathering of the Gargoyles in 2001.

The Hunters have destroyed the Clock Tower and reveal the gargoyles' existence to the world once and for all with unfavorable news reports on WVRN. A vengeful Goliath pursues the Hunters to a dam where he sends Jason Canmore plummeting over the edge, but accidentally knocks Elisa over as well, and is unable to save her. Elisa and Jason are seemingly killed, and both Goliath and Jon Canmore vow vengeance, while Robyn Canmore discovers Demona's scheme to destroy human kind. Elisa and Jason return during a climactic battle at Saint Damien's Cathedral, where Jon accidentally shoots Jason, paralyzing him. Wracked with guilt, Jon escapes, declaring vengeance on the gargoyles, and Demona's scheme is foiled when Goliath risks everything and destroys the Praying Gargoyle. Surrounded by the police and an angry mob, the gargoyles are rescued by Xanatos and reinstated to their ancestral home.

In a 1980 flashback at Notre Dame Cathedral, Demona retrieves the Praying Gargoyle when she is confronted by the current Hunter, Charles Canmore. She kills him and glides away laughing, while his three children watch from below.

Elisa unmasks Jason after he grabs her from the precinct, and she finally learns the truth about him. He drugs her and drops her off at her apartment.

Captain Chavez's leg is broken when the bombs strike. Elisa and Matt Bluestone visit her in the hospital, and learn about Charles Canmore and his three children, the three current Hunters.

Dominique Destine leaves Nightstone Unlimited to carry out her plan. Robyn Canmore raids her office and steals a disk containing Demona's genocidal plans, where she explains how she will combine the CV-1000 Carrier Virus with the chemical DI-7, and spread it with the help of the inscription on the Medici Tablet, while the Praying Gargoyle will protect her kind. 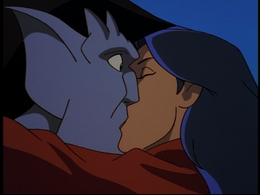 After Jason is knocked over the dam, Jon changes his tune from being sympathetic towards the gargoyles to becoming intent on killing them, more out of his own guilt for not killing them when he had the chance.

Elisa visits Jason in the hospital, and promises to be there for him, but admits there is someone who will always come first. She later goes to the castle, where she and Goliath declare their feelings for each other, and she kisses him just before the sun rises.

As in the first two parts, there are several echoes of Season One, and especially "Awakening", here. Among these are:

Familiar faces again show up in the background of this episode. Brendan, Margot, the Jogger, and Dave are among the frightened citizens watching Jon Canmore's news broadcast about the gargoyles. Travis Marshall reports on the battle at Saint Damien's Cathedral, and Officer Morgan discusses the escalating situation with Matt Bluestone there.

The Hunter's Moon is a real astronomical phenomenon, applied to the full moon during October. (However, the opening flashback incorrectly places a Hunter's Moon as shining on the night of September 28 - not that this nit need interfere with our enjoyment of the episode.) [1]

It is unclear when Xanatos first learned that the Manhattan Clan's home was in the Clock Tower. Despite the fact that Puck likely knew of this fact since the events of "Future Tense", that information could not be shared by Puck when he was Owen Burnett, per he and Xanatos's agreement. It's left up to interpretation whether or not Xanatos acted as if he already knew, even if he may not have. [2]

A few more scenes were deleted from this episode for time considerations. The most important of these (see below) was a meeting between Elisa and Jason Canmore at the ruins of the clock tower, in which Elisa urges Jason (in vain) to give up his feud with the gargoyles. She finally asks him what caused the feud in the first place, and Jason has to admit that he doesn't know; his family has been at war with the gargoyles for so long that they can't remember how it began. (A deleted line in the flashback had Charles Canmore telling his children that "We can no more stop hunting gargoyles than breathing the air", another echo of the first season.) Also, in the original script, Demona and Charles Canmore's battle did not end at Notre Dame; instead, Charles pursued her from the cathedral to the catacombs of Paris, where she killed him. (Bad Guys #3 drew on this original concept, here having the three young Canmores pursue Demona to the catacombs after their father's death.) Finally, a brief scene with no dialogue was originally planned that showed Robyn Canmore under guard and leaving Jason's hospital room moments before Elisa's final scene with Jason. This scene would've been a bit of a lead in to the Bad Guys spin-off.

Robyn Canmore was to initially face prison for her attack on the police station, but the mysterious Director would see to it that she would lead his Redemption Squad instead, resulting in her becoming one of the regulars in the SLG comic mini-series Bad Guys spin-off. Robyn, the only member of the team who would have contact with the Director, would recruit a number of other "semi-reformed antagonists", consisting of Dingo, Matrix, Fang, and Yama, taking them on one secret mission after another; in the process, she would enter into a stormy relationship with Dingo.

Jason and Jon's fates, however, would be incorporated into further episodes of Gargoyles itself. Jon adopted the new alias of "John Castaway" (following the Canmore tradition of using surnames beginning with a hard C as part of their assumed identities) and, with secret funding from the Illuminati, took advantage of the public's fear of gargoyles to start up a new version of the Hunters known as Quarrymen (a sort of Gargoyles Universe version of the Ku Klux Klan). Jason would eventually find out Castaway's true identity (he does so in "Estranged"), and make a number of attempts to turn him away from his destructive course; Greg Weisman also considered making him Elisa's date in the Double Date story (eventually issues #3-#5 of the "Gargoyles" comic book), but gave the role to Officer Morgan instead (though Jason has a cameo in "Invitation Only").

The visual of the gargoyles tearing through the Hunters' exo-frames was initially considered for Macbeth in "Enter Macbeth". [3]

[Note the following scenes were cut before they were sent overseas for animation. There's no lost footage.]

Elisa And Jason At Clock Tower

Elisa picks sadly through wreckage, occasionally placing something in a cardboard box. She bends to pick up a charred photograph.

It is a snap-shot from last Halloween: Elisa in her "Belle" gown arm in arm with Goliath. Both very happy.

A tear rolls down her cheek. A shadow falls over her. Elisa turns.

behind her on his sky-sled, in Hunter garb except the mask, aiming a tranq gun at her. Elisa drops the box and reaches for her holstered gun.

JASON: "Please don't. I'd just have to tranq you again, and I came here to talk."

She lowers her hand slowly. But she's still on guard.

ELISA: "Okay. Let's talk about what a monster you are."

ELISA: "You really are a piece of work. Using me to get to the gargoyles."

JASON: "No! I admit I infiltrated the twenty-third because there were so many gargoyle sightings here. But I never planned--"

ELISA: "Lies. Everything was part of your plan. That phony accent... even that phony kiss..."

He looks desperate and vulnerable, despite the gun in his hand.

JASON: "That kiss was real. And I never planned on falling in love with you."

This hits her hard.

ELISA: "But why are you hunting them?"

We see a flash of Jason's fiery determination. Elisa responds in kind.

JASON: "Those monsters killed my father!"

ELISA: "Those 'monsters' are my friends!"

He looks shocked and disgusted. This, he was not expecting.

ELISA: "And they couldn't have killed your father. When he died, they were in Scotland, frozen in stone by a magic spell."

JASON: "So they weren't personally responsible. They're still evil! All gargoyles are! My family has been hunting them for generations!"

Trying desperately to reach him.

ELISA: "BUT WHY? What started this blood feud?"

He's stumped. His fury won't help him on this one.

ELISA: "Of course it matters. You hate an entire race and you don't know why! Listen, Jason. You've been lucky so far. No one's been killed. Give up the feud. Turn yourself in. It's not too late to walk away from this."

He hesitates, then shakes his head.

He revs up the skysled and takes off fast. Elisa draws her gun, but she does not fire -- it's ambiguous whether that's because he's already too far away or because she feels too much for him to shoot him in the back. Her arm drops to her side. PULL BACK to show her forlorn and surrounded by rubble.

An exhausted Elisa sits on a bench opposite a guarded hospital room. Robyn, handcuffed and under police guard exits the room and approaches Elisa. Elisa raises her head. Robyn doesn’t look happy.

Elisa enters. Jason is hooked up to multiple tubes and machines. He is weak. But he is conscious.

After that silent exchange, Elisa and Jason have their scene beside his hospital bed.