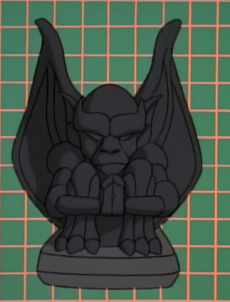 The Praying Gargoyle is a magical artifact originally created by Atlantians as a gift to the gargoyle race. [1] It is unclear, however, if it was literally created in Atlantis. [2]

The background of the Praying Gargoyle after its creation by the Atlanteans is unknown, but by 1920 it had found its way into the catacombs of Paris, France.

In 1920, Demona found the Praying Gargoyle in the catacombs and attempted to use it to destroy the humans of Paris (and perhaps beyond) by taking control of the city's gargoyle statues. In the ensuing battle with Fiona Canmore and Team Atlantis, the Praying Gargoyle was destroyed. But Demona recovered the remains and laid them in a secret hollow in the spires of Notre Dame Cathedral. ("The Last")

Demona retrieved the regenerated Praying Gargoyle from its hiding spot on the night of September 28th, 1980. She planned to make use of it to protect her race from the effects of her magical plague as part of "Operation Clean Slate", but Goliath destroyed it, thus ruining her plan and causing her to flee. ("Hunter's Moon Part Three") 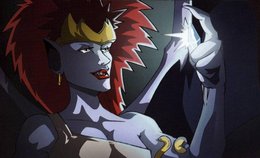 If Demona places the crystal on holy ground soon after retrieving it, the Praying Gargoyle will be due to regenerate once more in 2056.