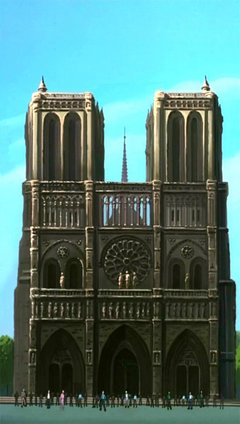 Notre Dame Cathedral is one of Paris's best-known landmarks, and widely considered to be one of the most beautiful cathedrals in the world. It was built between 1163 and 1345, and is noted, among other things, for its famous architectural gargoyles.

Gargoyles of the living variety are also linked to Notre Dame. The Praying Gargoyle was hidden for sixty years in the cathedral until Demona recovered it on the night of September 28, 1980 (just before she killed Charles Canmore). ("The Last", "Hunter's Moon Part Three")

Demona and Thailog also used the cathedral as their headquarters when they were laying their schemes against Macbeth in Paris, Thailog actually roosting atop the cathedral in the daytime amid the architectural gargoyles. ("Sanctuary")

At some point after 2198, Notre Dame will become the home of the Notre Dame Clan, but the details for this are as yet unknown. [1]

The Justice League Europe story "The Flashback of Notre Dame" featured a clan of cursed gargoyles resting atop Notre Dame Cathedral supposedly until the structure rose above the clouds or more accurately until Captain Atom and Bette Sans Souci kiss on the "night of the last full moon in February".