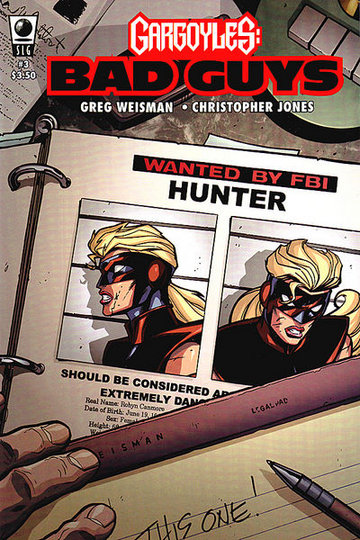 While Hunter, Dingo, Matrix and Yama are in Manhattan, trying to uncover why Doctor Sevarius freed Fang from prison, Hunter takes a break from the team to make peace with her wayward brothers - Jason Canmore and John Castaway!

Like the first two issues of Bad Guys, "Estranged" opens with more of the Redemption Squad's battle with the flying robots, focusing now on the actions of Dingo, Matrix (who once again becomes Dingo's flying suit of armor), and Hunter. Just as Hunter has been caught by one of the robots, however, we return to the flashback story.

Indeed, we have a flashback within a flashback, as Hunter remembers the night of her father's death (familiar to Gargoyles fans from the opening scene in "Hunter's Moon" Part Three), and how she and her brothers pursued Demona into the Parisian catacombs immediately afterwards. Demona speaks for the first time in any of the Gargoyles comic books (main or spin-off), and assumes one of her most nightmarish performances yet - especially when she reaches out from behind a wall of skulls to seize the young Robyn.

This additional flashback is all the more effective, as it runs alongside Hunter's meeting with her two brothers in New York. During her conversation with Jason Canmore (now working hard to rebuild himself), she helps him back to his wheelchair after he falls; in the flashback, we see Jason similarly helping her out of the pile of skulls after Demona flees. And when Hunter meets with John Castaway, we see a flashback to the young Jon Canmore begging his sister to forget about the gargoyle feud; in the present, their roles have reversed as Hunter attempts to persuade Castaway to renounce his war on the gargoyles, and fails. In one of the most moving scenes in the comic, as Hunter leaves the Quarryman Brownstone, we see the door to the building closing on a picture of the young Jon and Robyn.

The other members of the Redemption Squad are in the background, but continue to enjoy their own moments. Dingo gets to turn the tables on Hunter when he reveals that he's learned about her blowing up the Clock Tower (or might have turned the tables if she had not simply said "Your point being?"). We see each of them in their rooms at the Casablanca Hotel (their local headquarters in New York): Dingo is watching a Celebrity Hockey game on television while going through a series of drinks, Yama stands at attention in his stone sleep (with his weapons and gear lying on his bed), and Matrix has reverted to puddle-form on his own bed. And near the end, Dingo gets tired of waiting for their mission (to go after Sevarius) to begin and heads off with Matrix; Yama reports to Hunter, in a delightfully deadpan manner, "He was... 'bored'."

We only get a brief glimpse of Castaway (I was hoping for more, especially after seeing him in "Invitation Only"), but he's still handled well. His commercial for the Quarrymen is another highlight of the issue: he takes care to sound in it like a gentle, reasonable man, reaching out to frightened New Yorkers and offering to help them. And he is as aware that his sister's working for someone else as she is that he didn't set up the Quarrymen on his own.

Sevarius is revealed as the Redemption Squad's target (though the ending of "The Lost" hinted at that); he's up to something, though neither we nor the Redemption Squad know what it is. (We also learn, on the side, that he was apparently responsible for the thylacines in "Strangers"; it would be like him to engage in Jurassic Park-style activity.) The hunt for him leads Hunter into a sewer to find herself face to face with what is apparently Fang - while she recalls, once more, her childhood encounter with Demona.... 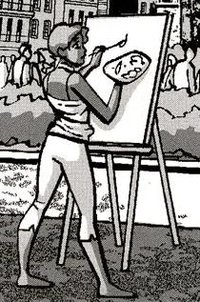 The first five pages are adapted from the Bad Guys Leica reel, like the opening pages in the first two issues.

Jason, Robyn, and Jon's encounter with Demona in the Parisian catacombs is based on a draft of "Hunter's Moon" Part Three (staged as a radio play at the 2001 Gathering) in which Charles Canmore pursued Demona from Notre Dame Cathedral to the catacombs, followed by his children, and was killed there; the events in the catacombs flashback are revised to fit the televised episode.

Dingo refers to Wolf's mutation in "Upgrade"; we now learn that Sevarius handled it.

The pad of paper on the cover appears to be "Weisman" brand (though the "W" is covered up).