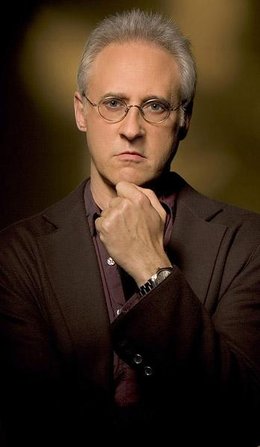 Brent Jay Spiner (born February 2 1949) is an American actor who provided the voice of Puck in Gargoyles. He is best known for playing the android Lieutenant Commander Data in Star Trek: The Next Generation, making him one of several Trek alums to provide voices in Gargoyles. Coincidentally, during an episode of TNG ("Time's Arrow, Part II"), the crew pretended to rehearse for A Midsummer Night's Dream with Data playing the part of Puck (speaking the line "How now, spirit. Whither wander you?").

Brent provided the voice for a very different version of Puck on an episode of The Librarians.

Brent provided the voice for Joker on Young Justice and is the voice of Silas Setebos in the audio-play adaptation of Rain of the Ghosts.

A shout out is made to him with the mention of the Celebrity Hockey player Spiner in "Estranged".