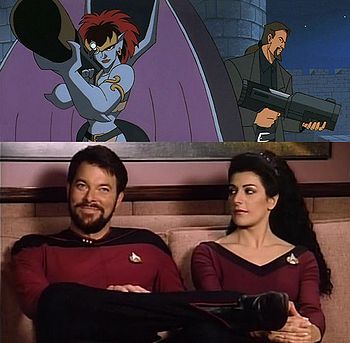 Star Trek is an American science-fiction franchise. As of July 2016, it spans six television series and thirteen films, as well as numerous novels and video games.

Star Trek is notable among fans of Gargoyles for the large number of Star Trek cast members that voiced characters on the show. Greg Weisman commented that, at first, this was unintentional. Marina Sirtis and, later, Jonathan Frakes were both cast in prominent roles, and soon the crew began to think of Star Trek actors when casting new roles. [1] For example, Brent Spiner was considered for the role of Anton Sevarius before that role went to Tim Curry, and Spiner was eventually cast as Puck. [2]

Staff writers Michael Reaves and Diane Duane also wrote an episode of Star Trek: The Next Generation called "Where No One Has Gone Before" in 1987 (although it was rewritten prior to shooting).

The following Gargoyles cast members had previously appeared in Star Trek television series or films. They are listed in the order of their appearance in Gargoyles.

John Rhys-Davies (who voiced Macbeth) also appeared in several episodes of Voyager as Leonardo da Vinci. However, his first appearance on Voyager occurred after he had been cast as Macbeth in Gargoyles.

Clancy Brown (the voice of Wolf) and James Avery (voice of the Shaman) both guest starred in episodes of Star Trek: Enterprise, some time after their initial appearances on Gargoyles.

Cary-Hiroyuki Tagawa, who voiced Yama in the Bad Guys leica reel but did not appear in Gargoyles itself, guest starred as the Mandarin bailiff in "Encounter at Farpoint", the pilot episode of The Next Generation.

Gerrit Graham (voice of adult Tom), appeared as the hunter in an episode of Deep Space Nine in 1993. His more famous Star Trek appearance, however, was as the renegade Q (later known as Quinn) in the Voyager episode "Death Wish". "Death Wish" originally aired on February 19, 1996, three days before the Gargoyles episode "Ill Met By Moonlight", which was Graham's final appearance on the show.

Patrick Stewart (who played Jean-Luc Picard on The Next Generation) was considered for several roles in the series (Goliath, Macbeth and King Arthur), but his representation turned down the offer because his usual fees could not be met. [3] The Gargoyles staff considered asking Jonathan Frakes or Marina Sirtis to make a personal plea to get Patrick Stewart to provide a voice for the series, but decided against this since it would not have been fair to any of the three people involved. [4][5]

Nana Visitor (who played Major Kira on Deep Space Nine) was briefly the voice of Fox, before Frank Paur had the role recast with Laura San Giacomo instead. [6]

Tom Wilson (who voiced Matt Bluestone) provided the voice for Crewman Rick Biessman in the video game Star Trek Voyager: Elite Force (which was released in 2000).

B.J. Ward (who voiced Fleance, Lydia Duane, Lady of the Lake and Billy's Mom) provided the voice for Katarina Scott in the video game Star Trek: Elite Force II (which was released in 2003).

References to Star Trek in Gargoyles

References to Gargoyles in Star Trek