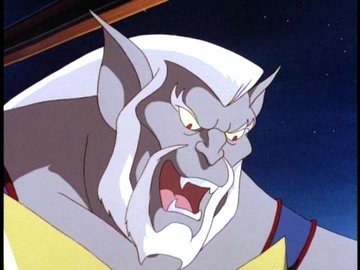 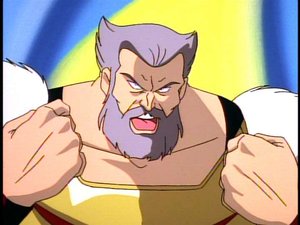 Wolf is a member of the Pack, and also a descendant of Hakon.

Wolf was a mercenary who was recruited by Fox and joined the Pack when Xanatos set it up. He was the strongest of its members, and also one of the most savage and blood-thirsty. [2] Like the rest of the Pack, he eagerly hunted the gargoyles after they appeared in New York, but was defeated by Goliath and Lexington, and afterwards captured by the police and sent to prison on Rikers Island. ("The Thrill of the Hunt")

Wolf escaped from prison with the rest of the Pack (except for Fox) during a jailbreak by Dingo and Coyote 1.0 (secretly set up by Xanatos to get Fox an early parole). They battled the gargoyles on the Otoshiana Maru oil tanker, but fled after Coyote was defeated. ("Leader of the Pack")

Following this defeat, the Pack resorted to robbing banks to make a living. Wolf got the idea for this when he saw television coverage of Terrorists holding hostages in a bank. [3] When Xanatos offered to "upgrade" the Pack to allow them to more effectively battle the gargoyles, Wolf opted to be mutated by Sevarius, and became a sort of wolf-man with increased strength. Although his new form allowed him to best Hudson in combat, he still failed to defeat the clan permanently. Xanatos helped him flee New York to Egypt with Jackal and Hyena. There, the three remaining Pack members and Coyote 3.0 assisted the Emir in the summoning of Anubis. Wolf was temporarily turned into a wolf pup by Jackal, when the latter served as the avatar of Anubis, but Wolf was later on restored by the Emir. ("Estranged", "Upgrade", "Grief")

Wolf went his separate way from the rest of the Pack afterwards, and was eventually drawn to the Archmage's cave by the ghost of Hakon, thanks to their shared bloodline. Hakon persuaded Wolf to take the Viking battle-axe that Hakon had become bonded with out of the cave, freeing Hakon from his imprisonment. The two of them went to New York to exact fresh vengeance upon Goliath and Hudson, but were defeated once again. ("Vendettas")

In 1997, Wolf was broken out of prison by Jackal and caused mayhem in Times Square with him and Hyena. ("Phoenix")

Wolf will eventually join the Ultra-Pack, and may be upgraded for it again, but we do not know the details. [4][5]

Wolf consistently tried to become the leader of the Pack, but was continually bested by Coyote-by both show of strength, and democracy. ("Leader of the Pack", "Upgrade")

It is unknown whether Wolf has fully mutated or, like the Mutates, is still changing in appearance.

In the final battle scene in "Upgrade", Wolf's appearance, a human shaped head with gray fur, a white beard, and long white hair, is briefly replaced with a more canine-shaped head. Wolf's usual appearance is restored in the final scene when the Pack has been rendered unconscious and the cops come to pick them up.

His real name is currently unknown, though his surname is likely to be reminiscent of Hakon. [6] Although, one time, Greg Weisman posited in jest that his real name was Rolf. [7]