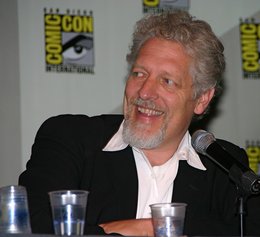 Clancy Brown was born in 1959 as Clarence J. Brown III; he has loaned his voice to several Gargoyles characters.

Clancy is also known for his role as the voice of Lex Luthor in Alan Burnett and Bruce Timm's Superman: The Animated Series and Justice League series. He also voiced the villainous leader of the Glorft, Warmaster Gorrath in Megas XLR and, once again, worked with Greg Weisman on Atlantis: Milo Returns & The Spectacular Spider-Man.

He currently provides the voice of Mr. Krabs on the Nickelodeon cartoon Spongebob Squarepants (along with Bill Fagerbakke who voices Patrick Star).

But he is probably best known for his role as the Kurgan in Highlander.