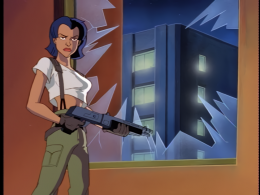 The unnamed Terrorist took Brendan and Margot hostage in a bank. Matt Bluestone tried to negotiate with her, but she refused to give in, saying her cause was worth any sacrifice. She quickly surrendered after being defeated by the gargoyles. ("City of Stone Part One")

Wolf along with The Pack decide to turn to a life of crime after seeing the terrorist and her accomplices in action.[1]

The terrorist would have reappeared in Bad Guys and her cause would have been revealed. [2]