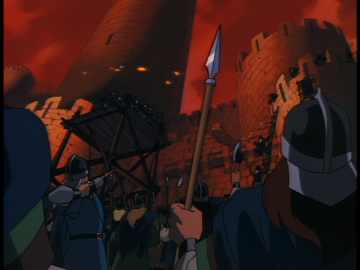 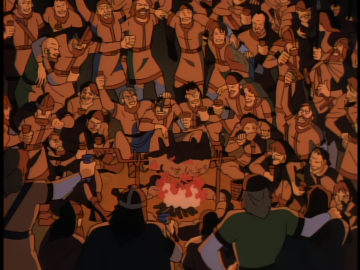 The Vikings were raiders from Norway, Sweden, and Denmark who attacked most of western Europe, including Scotland, during the early medieval period.

The Vikings were aware of the Children of Oberon, whom they called "Dark Elves". They also believed many of them, such as Odin, to be gods, and worshipped them before they were converted to Christianity. They also were aware of gargoyles.

A band of Vikings under Hakon attacked Castle Wyvern in 994, and finally sacked it with the help of the Captain of the Guard and Demona, although thanks to Goliath, they did not enjoy the fruits of their victory for long. ("Awakening Part One", "Awakening Part Two")

Vikings, properly speaking, were not the inhabitants of Norway, Sweden, and Denmark during the Dark Ages as a whole, but rather, that specific part of the population that went seafaring and raiding; the very word "Viking" means "raider," in fact. The first recorded Viking raid was in 789, when some Vikings landed in southern England and killed the Reeve of Dorchester. Four years later, in 793, they carried out the famous sack of Lindisfarne on the northeastern coast of England. After that, for the next two centuries, Vikings harried the coasts of Europe everywhere, even venturing as far afield as Constantinople (where many of them entered the Byzantine Emperor’s service as the Varingian Guard), and successfully won a great deal of plunder; in many cases, they actually won much territory for themselves, including northern England - which came to be known as the Danelaw, and where remnants of the Scandinavian language can be found to this day in place-names and local dialect - and Normandy, which was named after them ("Normans" being the French version of "Northmen" or "Norsemen"). They were indeed still raiding Scotland as late as 994, although the Viking Age was drawing to a close by then. (The traditional date for its ending is 1066, when King Harald Hardraada of Norway was defeated and slain at the Battle of Stamford Bridge.) Vikings also ventured westwards across the Atlantic, discovering and settling Iceland and Greenland and even, under Leif Ericson, temporarily settling in North America around A.D. 1000.

Contrary to popular belief, Vikings did not wear horned helmets in battle - these did exist, but only as ceremonial garb. The costume of Hakon and his followers in "Awakening", in fact, is a far more accurate depiction of the Vikings in actual history than the stereotypical comic-strip savage clad in bearskin and horned helmet.